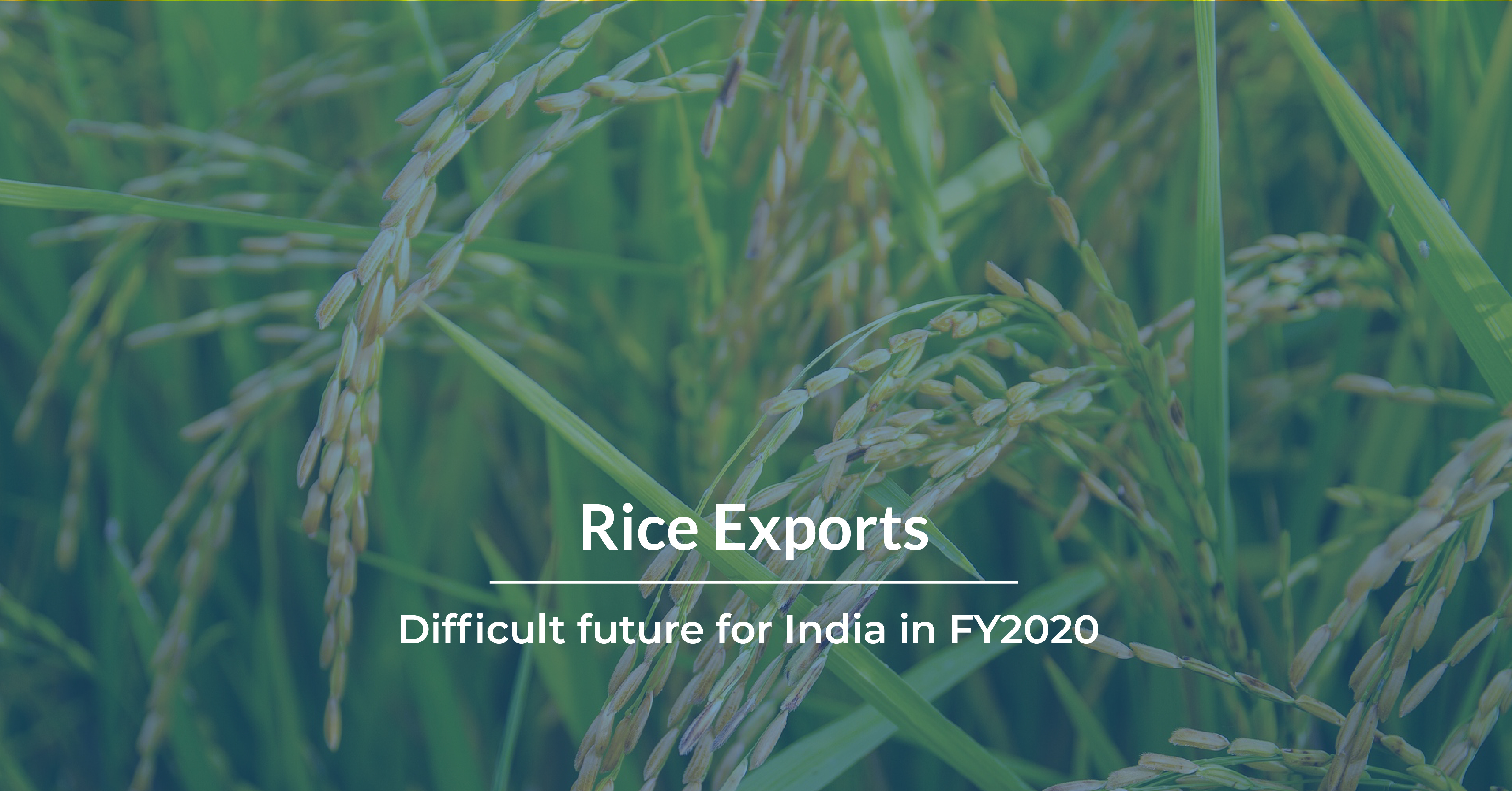 Rice is the most widely consumed staple grain across the world, providing more than one-fifth of the calories consumed worldwide by humans. With such massive global demand, international rice trade is worth nearly US$25 billion annually, and India contributes a signifcant chunk of these shipments.

India is the world's biggest rice exporter, contributing over 25% of the global rice trade in 2018. Within the Indian export basket, rice contributes more than 2% of the country's overall exports, and rice exports have grown steadily at a CAGR of 14% between FY10-19. However, rising geopolitical tensions, tighter international trade norms and a hike in MSP by the government have put the sector under stress, with an expected fall of 18-20% for FY20. 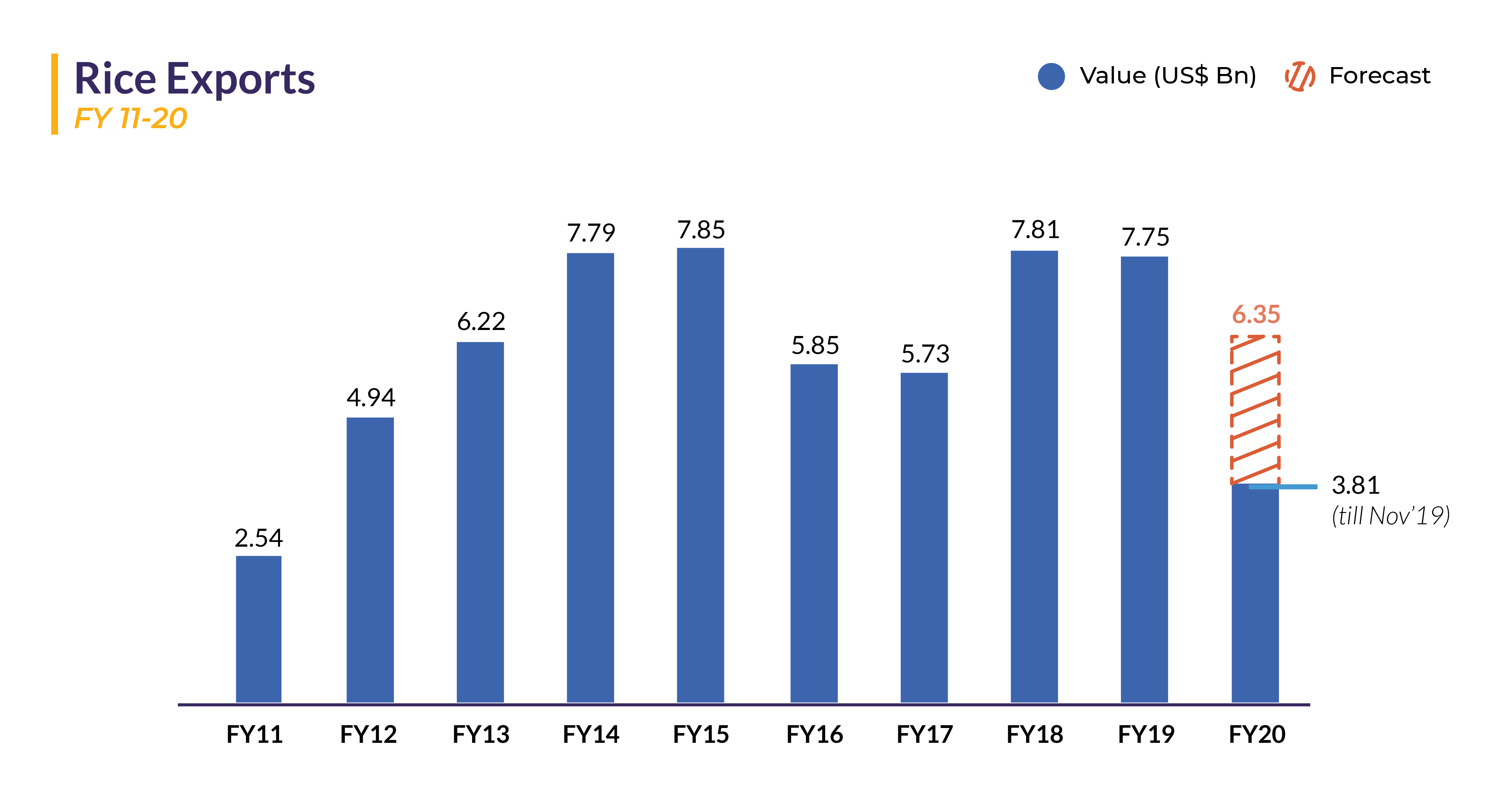 Rice exports in the current fiscal have been bleak, with heightened geopolitical tensions in the Middle East severely dampening shipments to the region, responsible for most of the demand for Indian rice. An overall downward trend in the price of rice has also further aggravated the situation. Of the top 10 rice importers from India, six have have seen their shipments dip this year (Iran, Nepal, Bangladesh, UAE, Yemen and Senegal), whereas four have seen growth (Iraq, USA, Benin and Saudi Arabia). 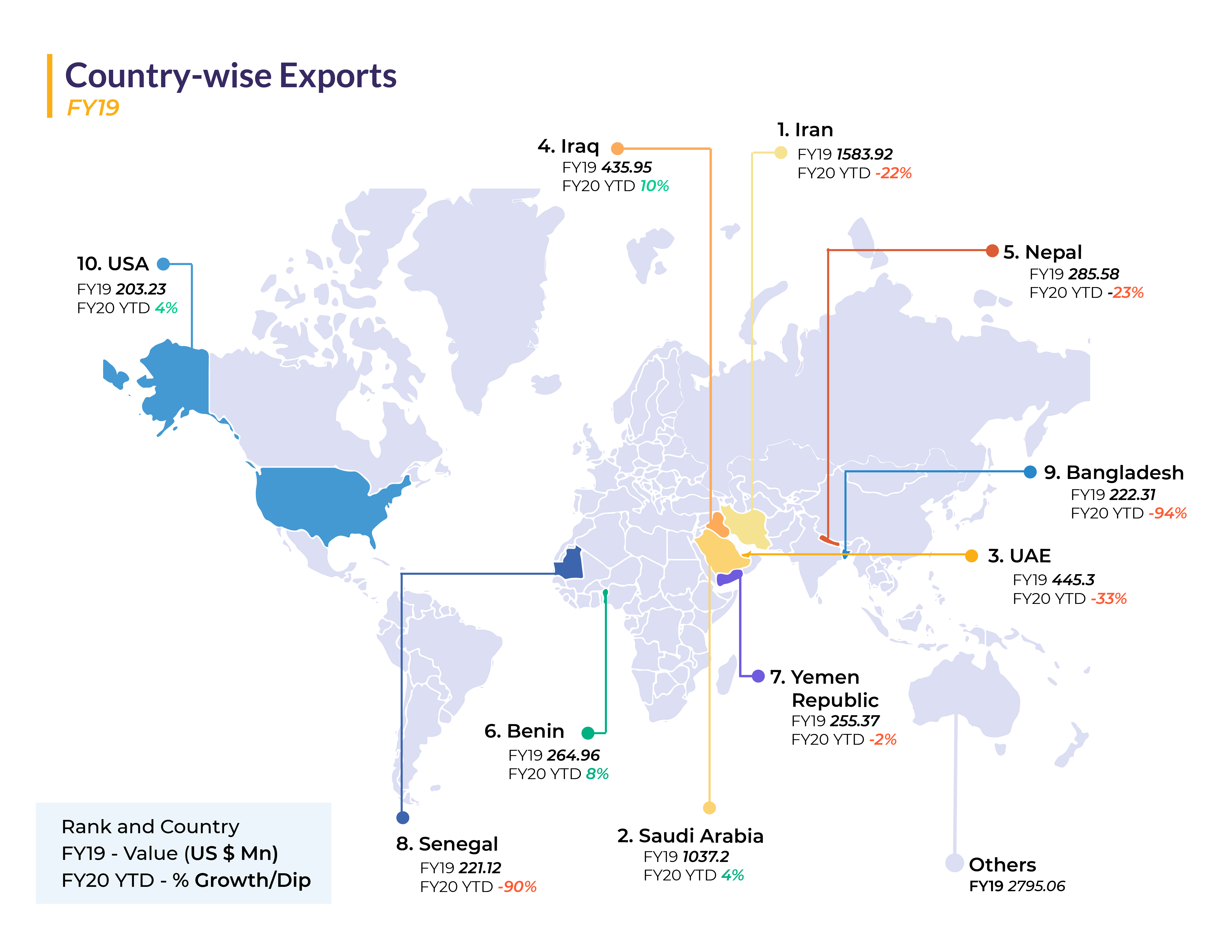 Rice is a kharif crop in India, grown usually in the autumnal August-November period. This annual cycle also influences the grain's shipments, with rice exports showing clear seasonality year after year. Normally, the four months post-harvest (December-March) see over 40% of the country's annual exports. However, exports in the current fiscal have been trending much lower than previous years. 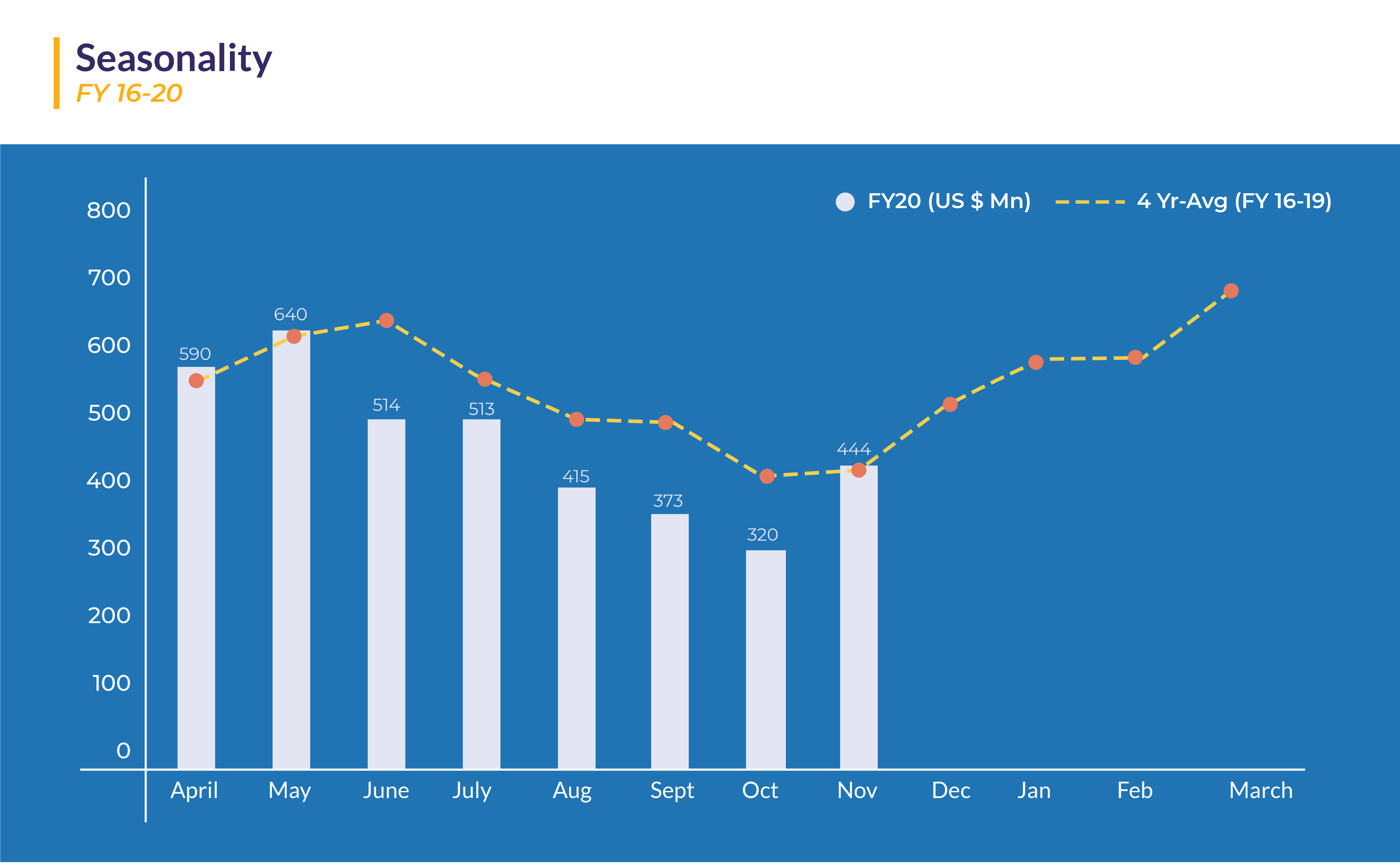 Haryana is the top Basmati rice exporting state in the country with a CAGR of 3% between FY16-19, shipping US$2,410 million in FY19 alone. Gujarat is second with shipments of US$1,106 million in FY19; however, Gujarat has posted an impressive CAGR of 47% over FY16-19. Other major contributing states are Delhi, West Bengal and Andhra Pradesh. 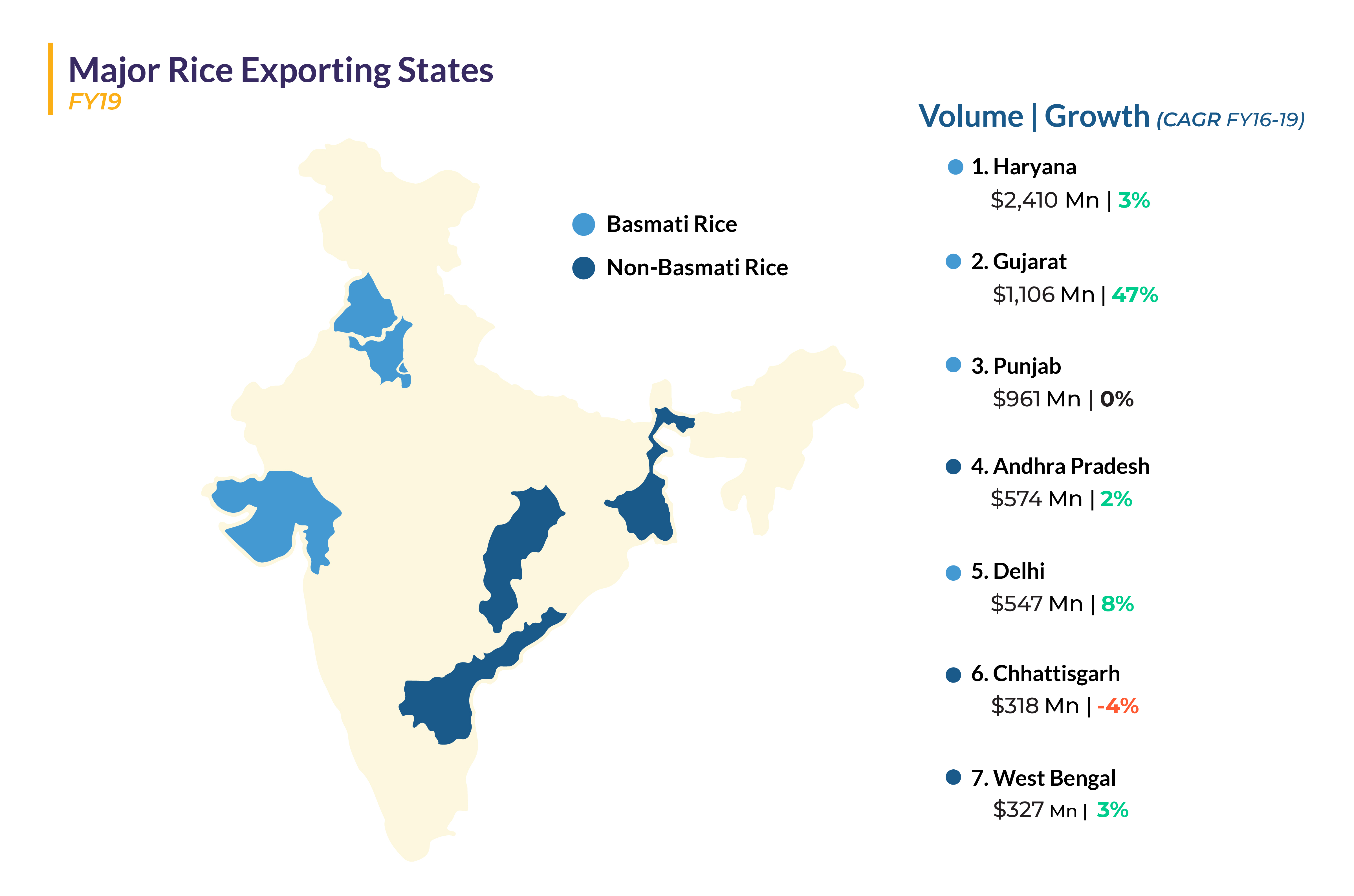 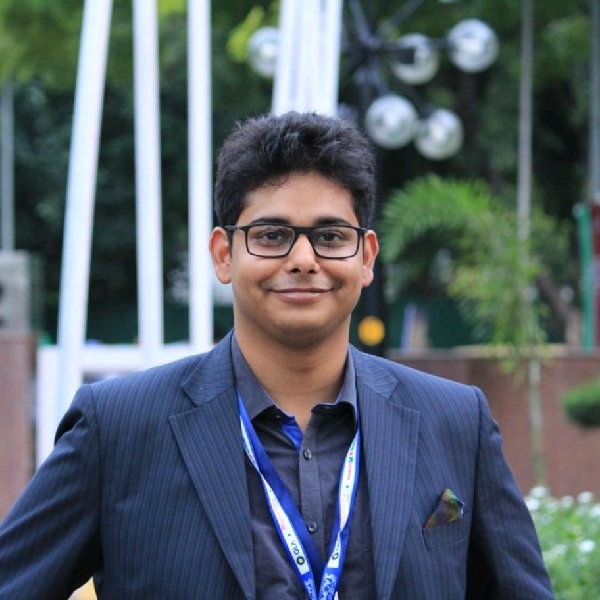