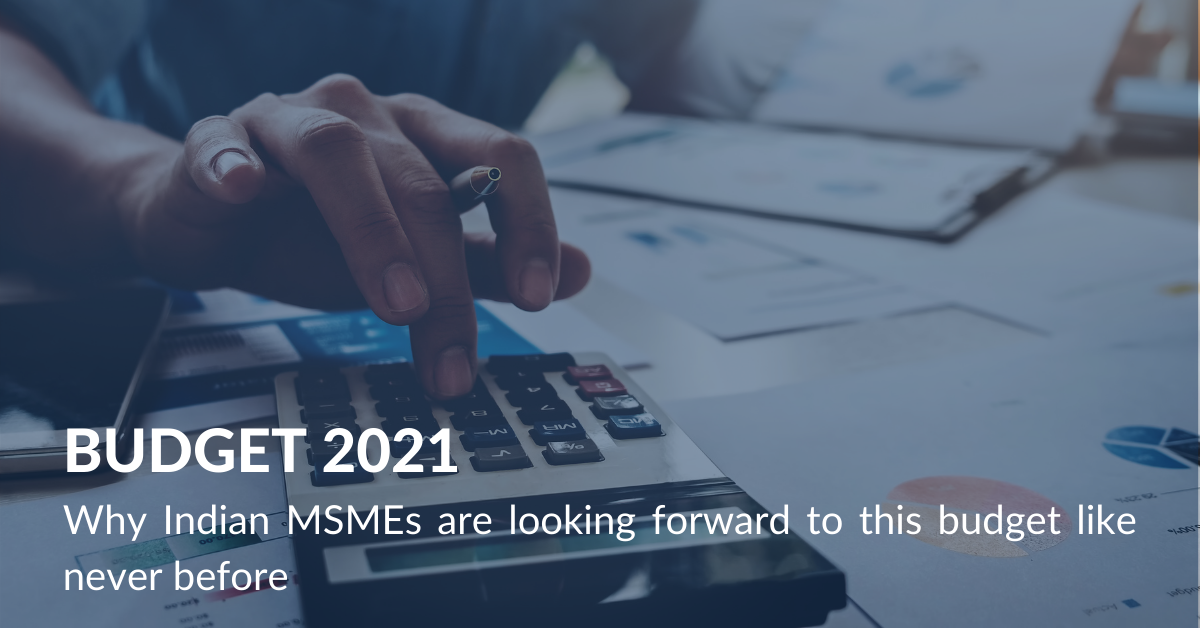 Budget 2021: Why Indian MSMEs are looking forward to this budget like never before

To say, 2020 had been tough, is an understatement. Can the upcoming Union Budget heal some of the wounds inflicted by COVID-19 on Indian MSMEs? Here’s what the sector expects.

In a few days, Union Finance Minister Nirmala Sitharaman will be presenting the next Union Budget to a country that has seen one of the worst years in recent memory. The COVID-19 pandemic has wreaked havoc, not just on health and healthcare, but on economies and businesses.

As we begin to come back to some form of normalcy, can the Budget offer some stimulus to those worse affected?

In March 2020, when the novel coronavirus was still novel in many ways, Prime Minister Narendra Modi, like his counterparts across the world, addressed the nation. He spoke about the newly announced pandemic that was taking thousands of lives. He said the way to tackle the virus would be for the country to go into lockdown. Nothing apart from essential services would stay operational.

The country was to stay home and keep safe. By that time, different Indian states had already announced their versions of lockdown, which included curfews, closed borders, so on and so forth. People were stocking up and taking things a little more seriously than usual.

But a nationwide lockdown with almost no notice? That jolted the population

Overnight, businesses were shuttered, people were left with no work, and worse, with no money. Everyone was hit hard, but smaller organisations faced adverse impact. Medium, small, and micro-enterprises (MSMEs) paid a heavy price. Most MSMEs had to shut, but they also had to pay workers, interest on loans, and pay for utilities they could not use.

Even when the lockdown eased, many of these companies could not get production back on track because they did not have the needed workforce. Most of the workers employed by MSMEs were contract labourers, and they had decided to take a long walk back to their homes — thousands of kilometres away. Therefore, workers, loaders, drivers, cleaners — in short, all the human capital that keeps small businesses running — disappeared almost overnight.

The sector was hit hard with labour disruption, demand slowdown, and supply shortfall. According to reports, this resulted in a 20 to 50 percent hit on MSME earnings. Remember, this is a sector that accounts for over 30 percent of the GDP. So, if MSMEs bleed, the country’s economy is bound to suffer.

The chief problem for the sector has been financial. With no money coming in due to lockdown, most MSMEs had to dip into their already scarce reserves to pay their bills. There’s little in the kitty to take care of any business expenses from here on. MSMEs in the essential sector fared better since revenue was still flowing in, albeit weaker than in pre-COVID times.

Some MSME manufacturers pivoted into producing 'essentials' such as hand sanitisers, medical equipment, and PPE kits. But, there’s only so much they can do before the market gets saturated and cheap imports to flood the market again.

Add to this is the fact that it was already difficult for MSMEs to get credit. It’s easy to see why this sector is in crying need of assistance — working capital has all but dried up for most of the smaller companies, and interest payments are squeezing the rest.

The Indian government has announced stimulus and incentive schemes for MSMEs, including a three-to-six-month moratorium on interest payments, which has given the sector a little breathing space; the problems of credit remain.

On the demand front, with the relaxation in lockdown and with more disposable income in the market, things started becoming easier. The government’s ambitious Aatmanirbhar Bharat Abhiyaan — with its message of self-reliance — is expected to further boost demand.

Can MSMEs meet this demand? If the labour and infrastructure issues are sorted, there’s no reason to believe they cannot. But, these are pressing issues that will need more than just SOPs.

There’s also the need for addressing the elephant in the room for MSMEs — the prospect of cheap imported goods flooding the market once other countries begin to ease trade barriers.

So far, with most of the world going into lockdown, the movement of goods was restricted. Also, the bogey of cheap Chinese goods may have receded somewhat as India closes the doors to China in the wake of COVID-19 and border tensions. There’s also a huge opportunity for Indian exporters as much of the world has begun to look for alternatives to Chinese goods.

Looking for a Budget boon

What can the government do?

While several MSMEs have asked the government to extend the loan interest moratorium, access to the formal credit system continues to be a problem for the sector. Alternative lenders leverage new-age technology to offer customised financing solutions to small companies, mostly without any collateral.

A good starting point could be to give fintech a boost and ease regulations for this sector. The government should also take this opportunity to promote digital literacy and digital access as these issues stand in the way of MSMEs taking advantage of what fintech can offer.

Another area MSMEs hope the budget will focus on is exports. Infrastructure, in terms of improved access to transport and warehousing, is something MSMEs need if they are to fulfil their potential.

An increased budgetary allocation to export-specific infrastructure warehouses, cold-chain, etc., will help. The new Remission of Duties and Taxes on Exported Products (RoDTEP) scheme clubbed with a Production-linked Incentive (PLI) scheme is a good starting point for such kind of tax-related stimulus that exporters need.

Another long-standing issue for MSMEs is that of skills upgradation. While Skill India and similar government initiatives have borne some fruit, a lot more needs to be done. The budget should invest in upskilling and introduce labour reforms to promote employment within the sector.

This year, the Budget has assumed added significance because it could be the silver bullet to the havoc caused by the pandemic. Of course, there’s only so much the government can do, given all the other calls on its finances. However, giving the MSME sector a serious place in the budget-making process could pay-off in the long term.

(The article was first publised on yourstory.com)