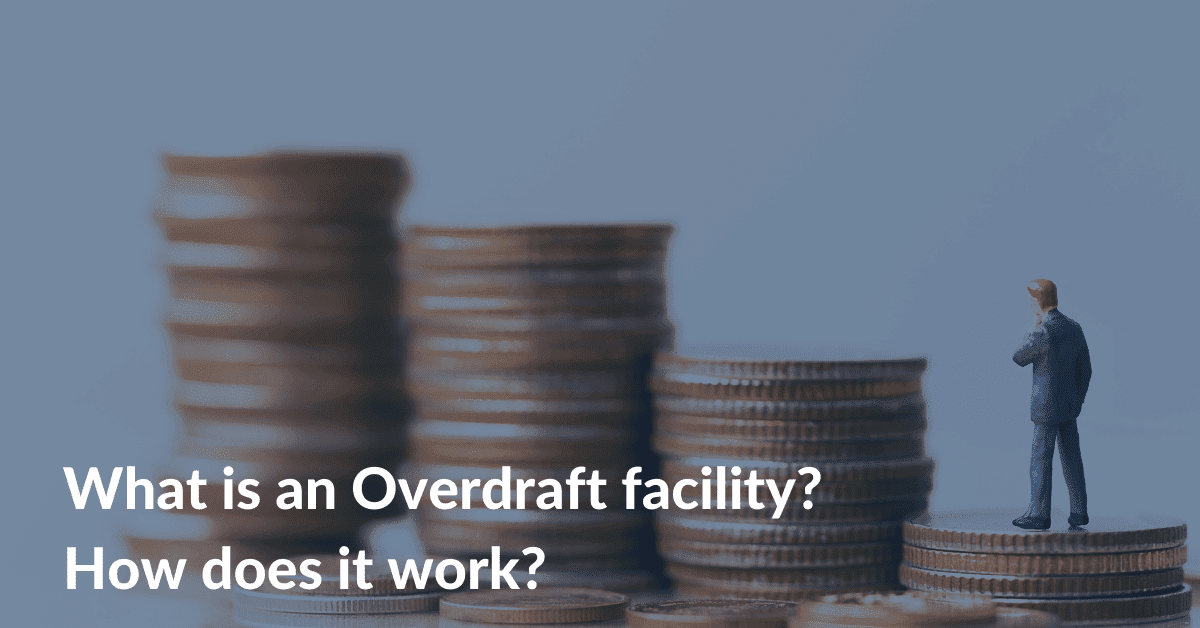 Overdraft Facility | What is it & How does it work

Many businesses find themselves in a fix when they need to make urgent transactions to their client but are short of funds. Sometimes they may issue a cheque that exceeds their account balance, which naturally bounces and inadvertently costs them dishonor charges.

The easiest solution to this is to apply for an overdraft facility on your bank account, especially if it’s a current account and you have a lot of daily transactions with it.

What is the meaning of Overdraft?

An overdraft is a facility provided by the bank through which an account holder can borrow up to a certain sum once the account balance reaches zero. The lender levies interest or an overdraft fee on the borrowed amount, and the money is to be returned within stipulated time frames.

Is an Overdraft a Loan?

Overdraft is essentially a loan since the account holder borrows the money from the bank or a financial institution. However, the banks only charge interest on the period for which the amount is borrowed.

Features of an Overdraft Facility

Credit Limit – Banks or lending institutions provide overdraft facilities to their account holders after determining the credit limit. The limit is calculated based on a variety of background checks on the applicant, and each account holder has a different credit limit.

No Prepayment Charges – Unlike with some other types of loans where prepayment attract charges, the banks seek no such fees in the case of an overdraft.

No Installments – For the overdraft facility, the banks do not ask for the repayment of the amount through easy monthly installments (EMIs). The borrower returns the money as soon as he can, along with the overdraft fees. However, to maintain a healthy credit score, it’s a good practice to pay the amount in time.

Joint Accounts Overdrafts – You can apply for the overdraft facility even in the case of joint accounts. If you borrow the money, the responsibility of timely repayment lies equally on both the account holders.

Note: When you write a cheque for an amount exceeding your account balance, the account may not always automatically go into overdraft, and the cheque may bounce. In this case, your account may attract dishonor charges. Hence, it’s always advisable to check with your banker and ensure that you’re eligible for using the bank’s overdraft facility.

How is an Overdraft paid back?

As you keep borrowing money, the due amount to be paid increases. A daily interest or overdraft fee is charged on the borrowed amount until you repay the full amount. However, you don’t need to repay it all at once. You can pay the lender back in parts, as and when convenient to you, as long as the lender allows you to do so.

As you pay the amount back, the due amount decreases, and hence the interest also decreases. Once you’ve made the full repayment to your bank by depositing the amount in your account, you are eligible to borrow again within the credit limit set by your lender.

How is the interest calculated in an Overdraft Facility?

Since there are no monthly repayments to be made in case of overdrafts, and the amount is to be paid either fully or partially in lump sums, daily interest is charged on the due amount until the applicant pays the amount in full.

Here’s an example of how an Overdraft facility works

Suppose person A owes Rs 5000 to person B and issues a cheque for the same amount to him. However, person A only has Rs 3000 in their bank account. So the cheque is likely to bounce due to insufficient funds. However, if A’s bank has provided them with an overdraft credit of more than 2000 INR, the cheque will go through, and person B will receive the amount in full.

The banks considered Rs 2000 as borrowed, and the bank will charge overdraft fees on the amount until person A pays the amount back in full.

How to apply for an Overdraft Facility?

To apply for overdraft facilities, apply to your bank or lender either in person or on their official website. Once you have sought an overdraft account facility, your bank will start looking into your application and run various background checks. If they’re satisfied with your ability to pay the amount back, you will be notified via an email or an SMS and will receive the amount in your account like any other type of loan. You can also get your account pre-approved for overdraft by applying in advance with all the necessary documents. In the case of pre-approved accounts, the account will automatically go into overdraft once the balance dips to nil.

How eligibility for an Overdraft is determined?

The banks determine your business’s eligibility for an overdraft based on three factors:-

What are the documents required for the application?

Here is a list of documents you’ll need to apply for Overdraft facilities:

Loan Documents (Applicable only if you have previously taken a loan)

Advantages and disadvantages of an Overdraft

Difference between Overdraft and other loans

One of the major differences between overdraft and other facilities is that the bank charges interest on the borrowed amount daily. Another difference is that there are no monthly repayment compulsions or EMIs. The account holder can simply deposit the due amount back in their bank account as and when the funds are available.

Difference between Overdraft and Cash Credit

Cash credit and overdraft are working capital facilities, and both the products work the same way. But some technical differences between these two set them apart.

A cash credit facility looks at the value of stock and inventory when calculating LTV. In the case of an overdraft, the bank only considers the primary collateral such as residential property for LTV.

Secondly, to avail cash credit, the business has to hypothecate its stock and inventory as collateral along with the additional property. Also, based on the business' performance, the banks can revise the limit up to which a company can borrow, which is not applicable in an Overdraft.

1. Is Overdraft secured or unsecured?

If an overdraft is approved against a bank account, it is an unsecured loan. However, banks and NBFCs also provide secured overdrafts against the following types of collaterals:

2. Where does Overdraft go on your Balance Sheet?

3. What other charges or fees do one have to pay for an Overdraft Account?

Most banks charge a processing fee when you first seek an overdraft facility. Apart from this, the bank charges a monthly interest based on the usage of the overdraft account. The interest is calculated daily based on the period for which the amount is borrowed.

4. Does an Overdraft affect your credit score?

There is no major impact on your credit score if you apply for an overdraft facility. It shall impact your CIBIL score, if you exceed the borrowed limit or if you fail to repay the amount on time.

5. Can an Overdraft be paid off in installments?

You can pay the overdraft amount in installments as well as in full, as per your convenience. How long the amount remains unpaid will only impact your interest amount, which is monthly.