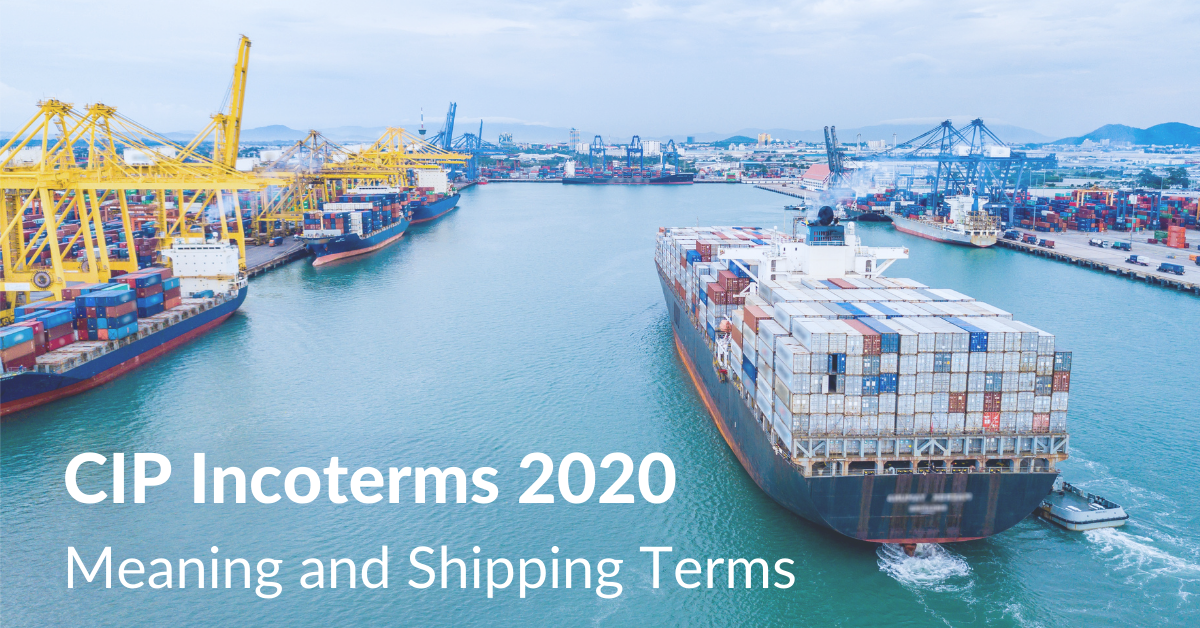 The CIP incoterm stands for ‘Carriage and Insurance Paid to’, wherein the seller is responsible for goods only till the first port, which is the exporter's country's port and not the terminal. It is one the 11 incoterms published by the International Chamber of Commerce, with a scrutinized edition released in January 2020. The term receives universal acceptance in international trade with consent from governments and authorities all over the world.

The rule is somewhat similar to CPT with only one difference in particular -- that the seller is accountable for carriage and insurance coverage till the named port. CIP can be used for multi-modal shipments, or for more than one mode of transit. In CIP, the title transfers when the goods are received by the buyer on the first port.

The seller has responsibilities till the named place of destination, and will bear costs such as:

As we considered our CIP place of destination to be the second port in the example above, the seller has his share of responsibilities till the target port which are to be completed within an agreed time and period.

He will have tasks such as:

CIP does include customs clearance, where the seller is liable for export customs and involved duty charges. He’ll be paying for settlement charges and look after freight forwarding proceedings. He has to prepare all the mandatory documents required for customs clearance and file them as required.

In a CIP transaction, the seller pays for insurance of goods. The seller, at his own cost, has to carry out the shipping terms and bear all the charges for licensing and security permits. He has to take coverage of goods as the liability of goods stays with him till the nominated port. The seller is not responsible for insuring goods after the goods have reached the nominated port. He can seize his duty and hand over all the necessary documents so that the buyer can comply with the importing formalities.

In CIP trade terms, the buyer’s responsibilities are limited to the charges and conditions mentioned in the terms of contract. As the place of delivery plays a major role in a CIP transaction, the buyer will be entitled to carry out proceedings right after the port of delivery. It can be the first port -- where the charges are incurred right from the carriage for shipping to the importer country’s port -- or the second port -- where he will incur charges related to import proceedings and inland transit.

When the agreed place of delivery is the second port, the buyer has to take care of unloading of goods on the designated port and take care of freight for inland transit of goods from the port to his warehouse. If the nominated place is the first port, the freight duty for bringing the goods to the importer country’s port lies with the buyer.

Under CIP incoterm, the buyer has to ensure that he receives all the necessary documents from the seller required for import proceedings. As the buyer takes over authority right after the destination port, he’ll be the one paying for charges such as import taxes and duties.

The buyer has no obligation in CIP with respect to insurance (referring to risk and damage of goods). The insurance coverage charges are to be borne by the seller. But as discussed earlier, the buyer could pay for additional coverage borne by the seller, i.e., insurance from the named port till the buyer’s warehouse, as per the agreed terms between both the parties. 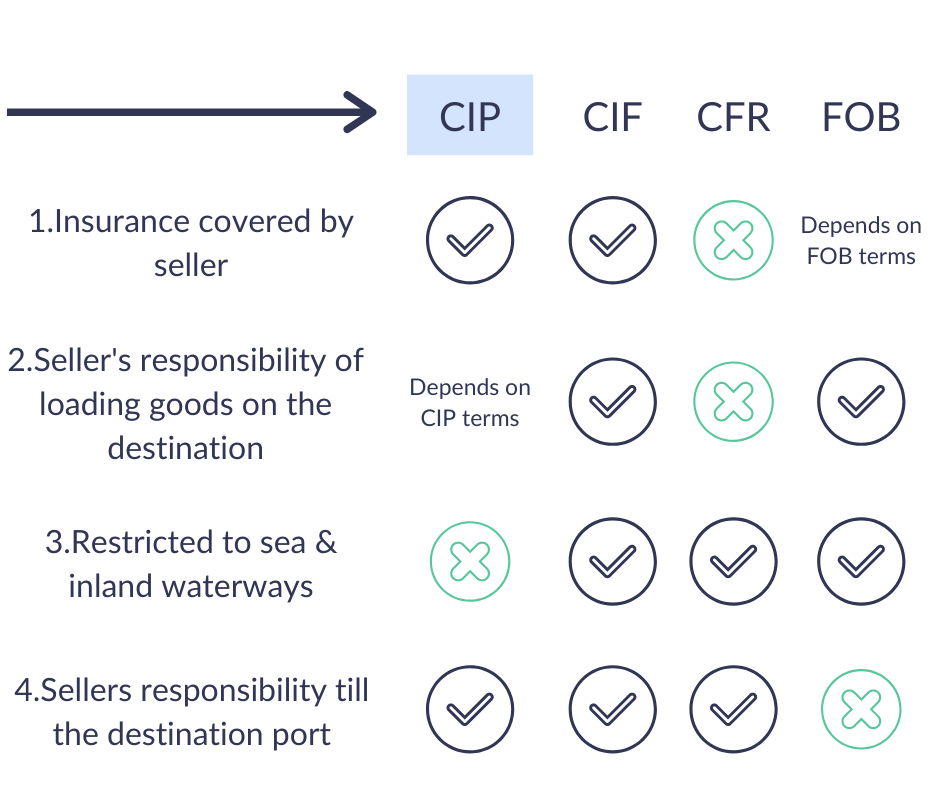 What is the process in CIP?

A CIP process starts with the seller -- responsible for the the freight, shipping and insurance till the destination port after which the risk is transferred to the buyer who is liable for transit and costs incurred thereafter.

What does CIP price mean?

The CIP price is the price or cost which is chargeable or quoted to the buyer by the seller during the trade process. Under CIP the seller has to pay for freight, carriage and all other charges till the destination port out of his own pocket and cannot recover it as shipping cost from the buyer, however he may consider these costs and accordingly arrive at the price which he wants to quote to the buyer.

Does CIP include customs clearance?

Under CIP terms, both parties have an equal contribution. where the exporter settles for export proceedings and arranges all essential documents, the buyer gives his consent for all the evidence provided by the seller and looks after the import customs.

What is the difference between CIP and CIF?

In CIP, the risk of goods passes from the seller to the buyer at the destination port, whereas in CIF the risk is transferred to the buyer -- once the goods are loaded by the seller on the vessel port. 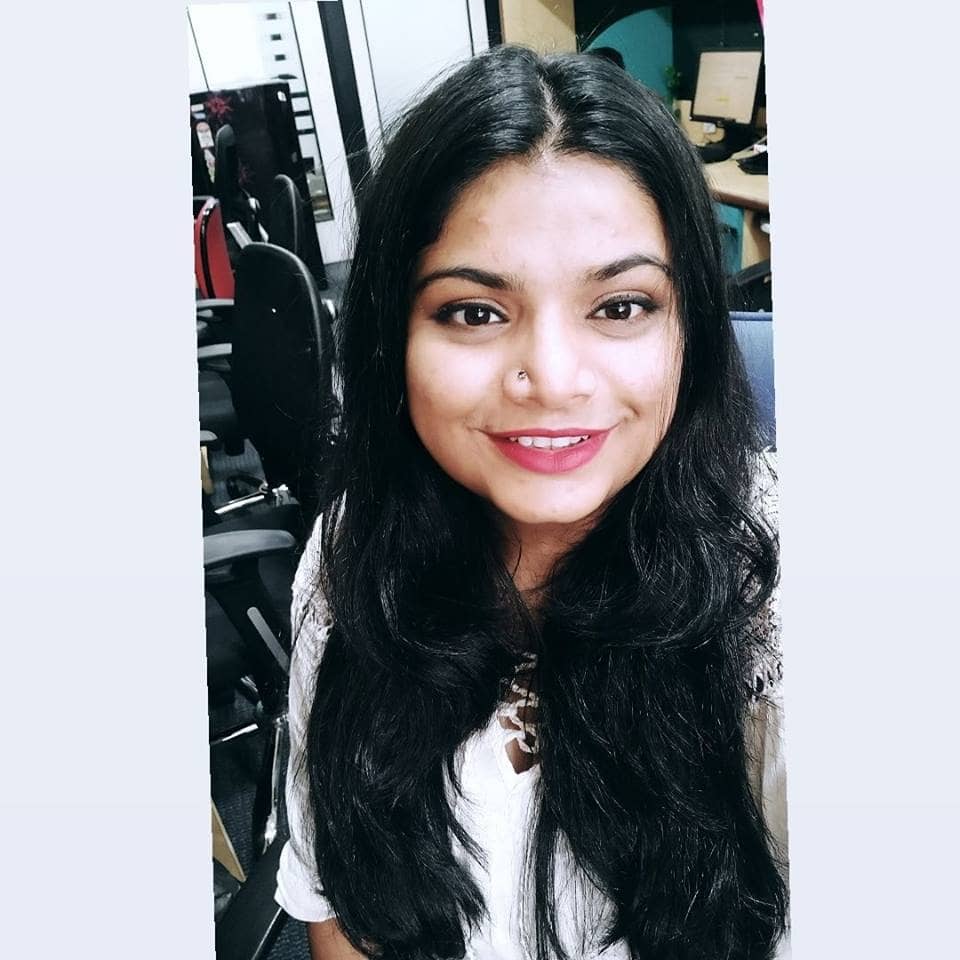