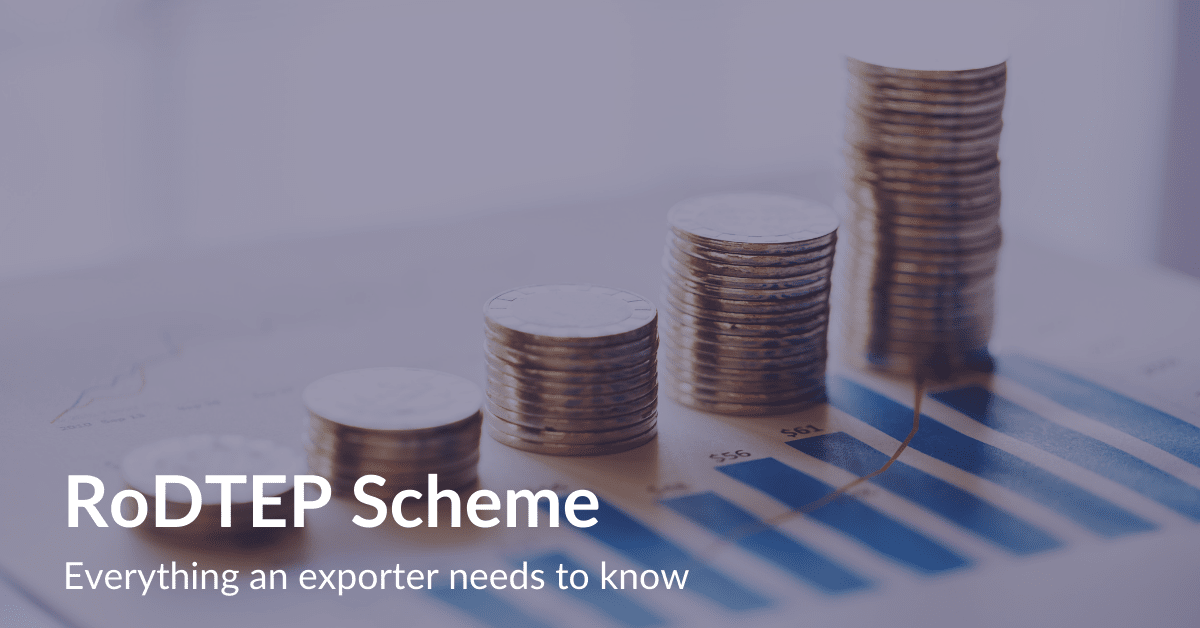 RoDTEP Scheme: Everything an exporter needs to know

The Remission of Duties or Taxes on Export Products (RoDTEP) is a scheme that has recently been rolled out by the government of India, to provide reimbursements of any tax, duty, or levy paid by the exporters while exporting goods from India.

All the duties or taxes charged at the manufacturing and transportation stage that were previously not refunded under any of the existing schemes will now be covered under this scheme. The RoDTEP scheme has replaced the Merchandise Exports from India Scheme (MEIS) as the latter wasn’t compliant with the World Trade Organisation’s (WTO) trade norms.

Who is Eligible for the RoDTEP Scheme?

How to Apply for RoDTEP Scheme Online?

The process of applying for the RoDTEP scheme is quite similar to that of the Rebate of State & Central Taxes and Levies (RoSCTL).

The following steps can be implemented to apply for the RoDTEP scheme:-

Also Read: How to file a Shipping Bill Online?

How does RoDTEP Scheme Work?

Here is a step-wise process of how the RoDTEP scheme works:-

To avail of the benefits provided under the RoDTEP scheme, exporters have to first create an electronic credit ledger by logging on to the ICEGate portal (www.icegate.gov.in) using their class 3 Digital Signature Certificate (DSC). In case an exporter is using the portal for the first time, they need to register themselves and then log in using the credentials.

Once the user has successfully logged onto the portal, they can select the ‘RoDTEP option’ from the scheme name drop-down menu and create a credit ledger account.

The following information can be acquired using this service:-

Step 2 : Declaration in the Shipping Bills

Any exporter who wants to claim the benefits provided under the RoDTEP scheme must declare ‘RoDTEPY’ on that particular shipping bill, and ‘RoDTEPN’ in case they don’t want to avail the benefits. If a shipping bill does not specify either of these details, then, automatically, the exporter will not get any reimbursement.

Once the Export General Manifest (EGM) has been filed by the carrier, the shipping bills are profiled RMS and are either sent to an officer for intervention or directly to the respective scroll queues. Once the scrolls are generated, the amount is available in the form of credits on the ICEGate portal.

The credits on the portal can be converted into credit scrips by the exporter. Every user is given a unique Scrip ID. Entries are made in the credit ledger every time a new scrip is generated.

Scrips are classified into six types:-

Also Read: Duty Credit Scrips: Meaning & How to sell them

At the moment, the government has not extended the RoDTEP scheme to the exports by SEZ and EOU units. However, there has been a great demand from the industry for making these inclusions in the scheme.

RoSTCL is a scheme that provides incentives in the form of credit scrips to the exporters based on the Freight on Board (FOB) value whereas under RoDTEP the government will provide rebate on the taxes levied during the manufacturing process of export goods. 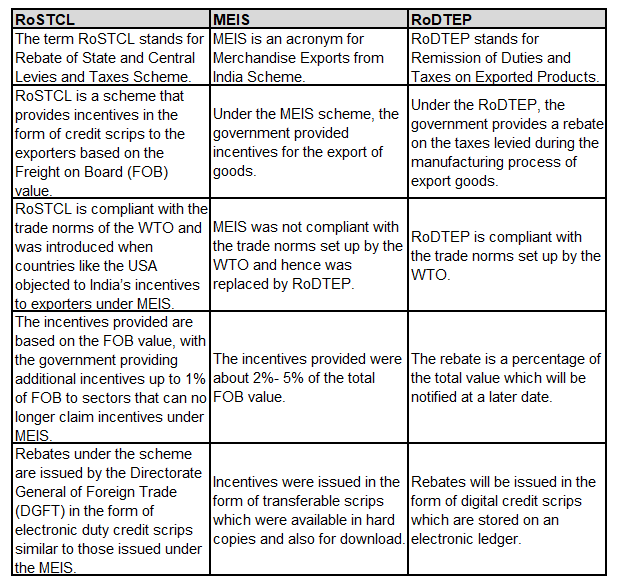