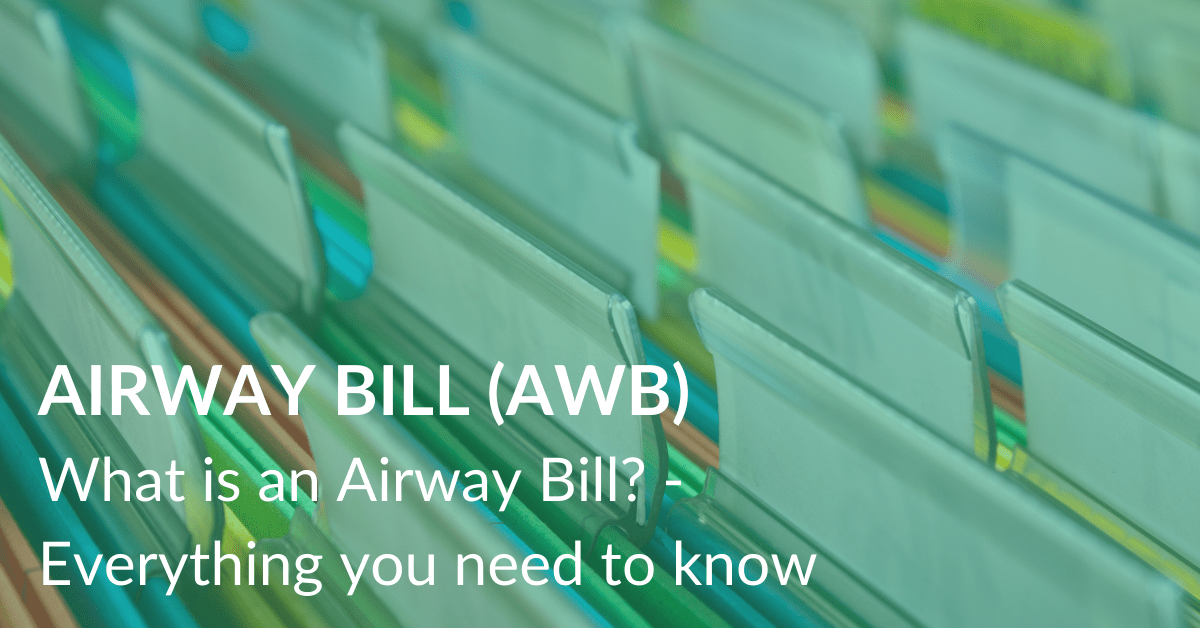 What is an Airway Bill (AWB)?

An Airway Bill (AWB) is a document that consists of all the details about the goods that are transported via air cargo. Airway Bills are issued by a carrier or the agent representing the carrier and have details such as the shipment contents, the details of the supplier and the recipient, terms, and conditions under which the trade is to occur, and other vital information.

Another significant thing about the Airway Bill is that it is a legal document, often used during disputes between the parties indulged in the trade. It is, therefore, that the International Air Transport Association (IATA) has instructed air cargo operators worldwide to issue airway bills in a standard format to ensure that there are no discrepancies.

Airway Bills serve multiple purposes and below are a few: 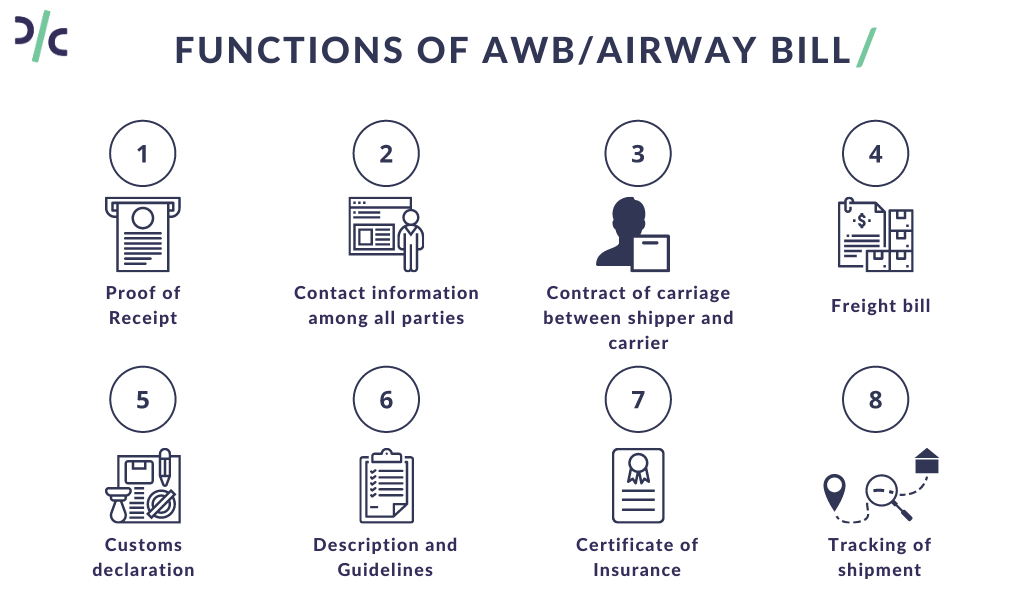 When an air cargo carrier issues an Airway Bill, it acts as legal proof that they have received the goods mentioned in the bill. The document is subject to legal scrutiny in case of any dispute.

Contract of carriage between shipper and carrier

All Airway Bills contain a detailed agreement and terms and conditions under which the trade is to occur. These are enlisted behind the Airway Bill.

A freight bill contains details of all the ancillary charges that are during the trade. Airway Bills includes all of this information. When paired with the supporting documents, it can play the role of a freight bill and help with the accounting process.

Airway bill is one of the most critical documents presented at the customs clearance desk. It is a legal document containing details about the freight being moved via air.

Airway Bills contain a detailed description of the goods that are being moved. It also includes the quantity of the goods as well as the nature of the product. Additionally, if there are any particular guidelines to be followed while moving the goods, the airway bill also mentions them for the shipping company’s benefit.

Since the Airway Bill is legal proof that the carrier has received the goods, it can also be used by the carrier to insure the goods, especially if requested by the supplier.

Each airway bill has its own unique ‘Airway Bill Number.’ If you want to track your shipment, all you have to do is input the corresponding airway bill number on the carrier’s website, and they will show you the latest information about your cargo.

HAWB vs MAWB vs EAWB

When the freight forwarder receives the goods sent via air cargo from the supplier, they provide the supplier with an airway bill. It acts as a receipt of delivery, containing details of the cargo as well as the terms and conditions of the transaction.

When the primary carrier or the shipping company receives the freight forwarder’s goods, they sign and issue an airway bill, which contains the details of the air cargo to be transported, such as the terms and conditions, routes, contents of the cargo, etc.

This type of airway bill is known as a Master Airway Bill.

An Electronic Airway Bill (E-AWB) is a term used by the International Air Transport Association (IATA) for the transfer of crucial information related to the trade between the primary cargo operator and the freight operator. E-AWBs are used in place of traditional Airway Bills to reduce paper usage and cut the processing time and costs.

A total of eight copies of an airway bill is made - each having its purpose and a color-code. The first three copies are known as original bills, while the rest are copies.

The following table talks about what the color code of the Airway Bills means:

Each airway bill issued by a carrier bears a unique 11 digit Airway Bill Number/AWB Number. The AWB number makes it very easy to track the packages and keeps a tab on all the movements along the various trade routes. Once an AWB is issued, the shipping company will identify your consignment only by its unique AWB number.

Where can I find it?

The AWB number is mentioned on all the copies of the Airway Bill. Alternatively, you can obtain your AWB number from any messages or emails that the company has sent you about your consignment.

However, even if you have none of these, you can simply contact the shipping company and ask them for the AWB number of your shipment by answering a few questions and providing them the details of the shipment.

If you want to know the current status of your air cargo, all you have to do is go to the website of your shipping company and input the AWB number of the cargo. The website will display the latest available tracking report of your shipment along with an estimated time of arrival. It also includes all the details of the cargo's air route.

Difference between Airway Bill and Bill of Lading

Exporters, in their early days, often get confused between two documents that are more distinct than they are similar, namely the airway bill and the Bill of Lading (BL). One of the reasons for this confusion is that both the documents are legally binding on the parties and contain the shipment details.

However, there’s much that separates the AWB from the BoL. Here are some of the differences between these documents:

1. How to generate an airway bill?

To generate an AWB, log in to your account on your shipping company's website, and add the AWB number provided to you by them. Add the items to be shipped under the Airway Bill and click on "Save.”

2. What is the purpose of the airway bill?

An Airway Bill is a legally binding document that serves as proof of receipt of goods by the issuing authority.

3. Why is the airway bill a non-negotiable deal?

Airway Bills are non-negotiable documents because, unlike Bills of Lading, they do not transfer the goods’ ownership and are just proof of receipt.

4. Is the airway bill the same as the tracking number?

Each Airway Bill consists of a unique number known as an Airway Bill number. It can be used to track the package and learn the latest status and other details like ETA, air route, etc.

6. How many types of airway bills are there?

There are two types of Airway Bills- Neutral AWBs and Airline Specific AWBs. Neutral AWBs don’t have a logo, while the airline-specific AWBs must have a carrier’s name and details like head office address, logo, website as well as an AWB number.