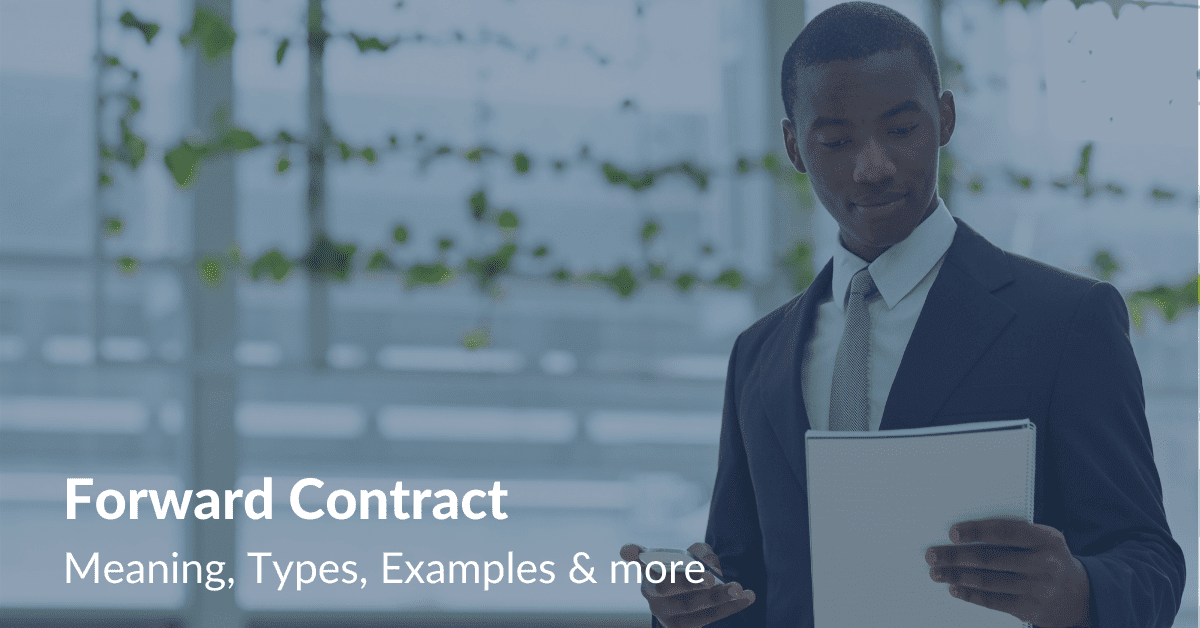 All commodities, be it crude oil or even food grains, go through a price fluctuation. The price of a barrel of Crude Oil may juggle between being $50 Today and rising to $65 next month or maybe drop down to $30 a month after. These fluctuations often cause plenty of uncertainties for the businesses that depend on these commodities.

Apart from uncertainties, such fluctuations in the prices induce a lot of speculations. Companies that trade such commodities would want to leverage the dynamic prices and often use a type of financial derivative called “Forward Contracts” to buy or sell them.

What is a Forward Contract?

A forward contract is a financial derivative that is customized between two parties, wherein a commodity is bought or sold at a predetermined price but on a future date. These contracts are not standardized or regulated by any third-party authority and are considered a type of over the counter (OTC) deal between the two parties.

Forward contracts are an excellent tool for hedging your investments. They can also be used for speculations, but that option is less popular due to their non-standardized, non-regulated nature.

What are forward contracts used for?

Features of a Forward Contract

The following are features of any forward contract between two parties:

What is a currency forward contract?

A currency forward deal works in the same way as any other forward deal, except that instead of a commodity, the currency is traded on a future date, on a foreign exchange market. The exchange rate is locked at the time of signing the contract, and hence, market fluctuations don't have an impact on it. Unlike other derivatives like the exchange-traded currency futures, parties can customize a currency forward contract to suit their needs.

However, the currency exchange rates are volatile and may increase or decrease in the next 90 days. The exporter wants to insulate himself from such risks, hence enters into a currency forward deal with a bank. The bank offers an exchange rate of 1.19 on the 90th day, which is slightly less than the current rate. The company Y receives 1 million Euro on the 90th day from company X and deposits it to the bank. The bank applies the locked exchange rate of 1.19 and gives them $1.19 million, irrespective of the current exchange rate. If the rate tips below the locked limit, the bank suffers a loss, and the exporter successfully evades it. If the rate goes above the locked limit, the exporter misses out on the opportunity while banks book a profit.

How does an FX Forward Contract work?

A foreign exchange (FX) forward contract is a contract between two parties where they mutually agree to exchange two designated currencies at a future date. These contracts are used for hedging and speculating on currency exchange rates. The exchange rates are locked in advance, which saves both parties from the unpredictability of the global currency spot rates.

Example of how a Forward Contract works 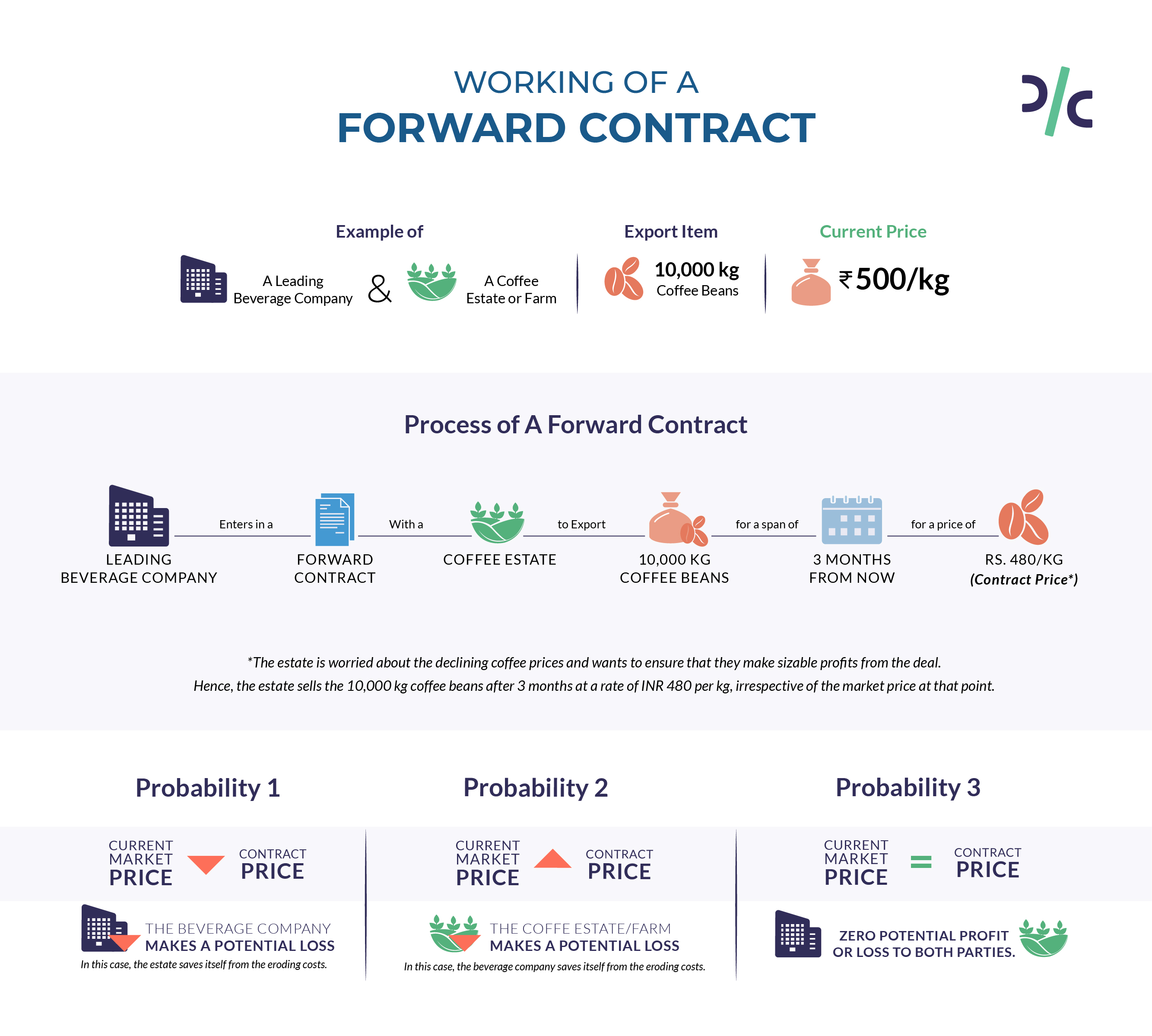 A leading beverage company enters into a contract with a coffee estate for exporting 10,000 kg coffee beans three months from now. The current price of coffee beans is INR 500/Kg. However, the estate is concerned about the declining coffee prices and wants to ensure that they make sizable profits from the deal. Hence, the estate enters into a forward contract with the beverage company to sell the 10,000 kg coffee beans after three months at a rate of INR 480 per kg, irrespective of the market price at that point.

After three months, the beverage company will procure the same amount of coffee beans from the estate at an agreed price as per the forward contract.

There are three possibilities:

Hedging vs Speculation in Forward Contracts

Speculation refers to the process of figuring out which way the markets will move in the future and taking positions on various assets and stocks depending on those projections. It is highly risky and is akin to gambling. Speculation is done by those who claim to read the markets very well.

Hedging, on the other hand, is done by companies to reduce their risk exposure due to the fluctuations in the commodity prices. During hedging, companies and investors take offsetting positions opposite to their current holdings so that the net comes as close to zero as possible.

How a Forward Contract can be used for hedging in exports?

During exports, there is a significant time gap between the signing of a deal and payment. During this gap, the value of the respective currencies is likely to fluctuate a lot in either direction. Both the parties may find themselves in a fix at the time of payment due to these changes in the exchange rates.

How do you value or price a forward contract?

The price of a forward contract, which is often known as the forward rate, is obtained by adding /subtracting the forward points to/from the spot rate. Forward points are calculated based on the difference in the interest rates of the two currencies that are to be traded.

This is the simplest type of a forward contract, where both parties agree to exchange currencies at a future date by locking in an exchange price. These are also known as European contracts or Standard Forward Contracts.

With flexible forwards, the parties can exchange the funds before the settlement date, often in parts, as long as the entire amount is settled by the due date.

Usually, parties enter into forward contracts over a physical exchange of a commodity, an asset, or currency. However, with non-deliverable forwards, the parties only exchange the difference between the contract rate and the spot rate at the time of maturity.

Advantages of a Forward Contract

The following are the advantages of a forward contract:

Risks or Limitations of a Forward Contract

What is the difference between a Forward Contract and a Futures Contract?

Parties cannot customize future contracts. However, forward contracts can be customized and tailor-made as they are an over the table deal.

What is the difference between a Forward Contract and a Spot Contract?

However, if a company needs an asset or a commodity six months later, but is skeptical about its prices skyrocketing by then, they decide to buy it at its current price but after six months. Such a deal is known as a forward contract.

Can Forward Contracts be canceled?

Either of the parties can cancel the contract. The canceling party has to pay the difference between the contract rate and the spot rate of the commodity.

No, forward contracts are neither regulated nor standardized. They are customized contracts between two parties and considered over the counter (OTC) deals.