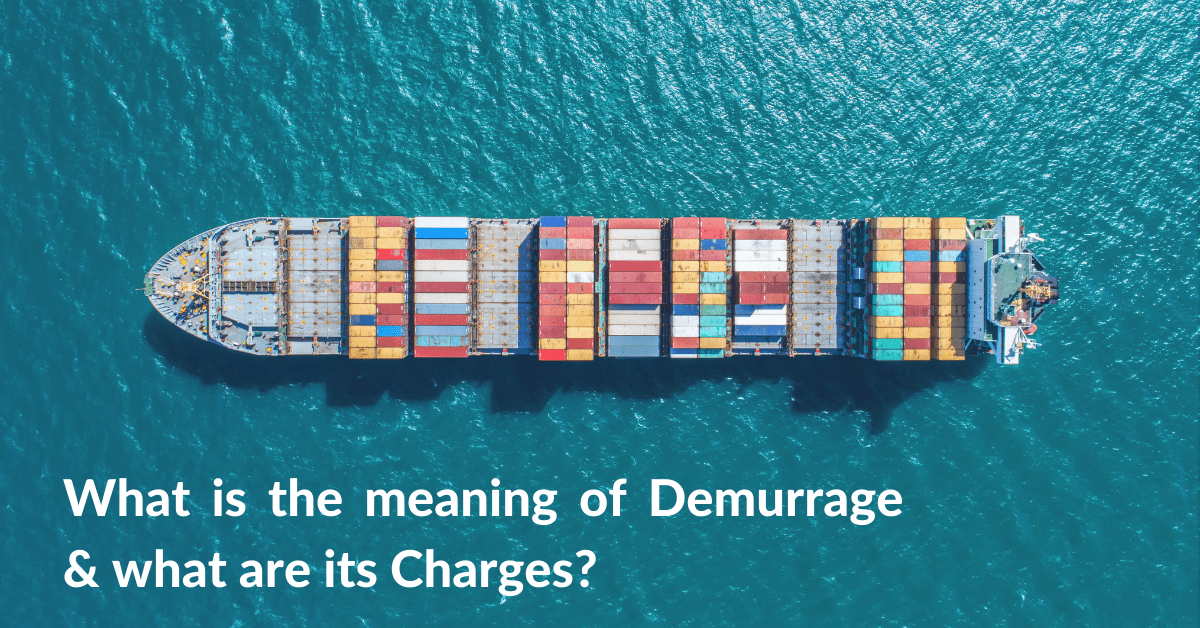 In any project involving dependent activities, delays in the process can lead to additional costs. When it comes to the shipping market, time is money. To address this, let us briefly understand the journey of importing or exporting cargo by sea shipping. Whenever a cargo is imported or exported, a charter agreement is formed between the shipowner and the charterer to make sure that its loading and unloading is done in the stipulated time frame. The cargo is in the form of shipping containers and is carried by ship to the designated port. The containers are received by the customs department and are stored in the yard without any charges for a certain time, referred to as free time.

Laytime varies as per the shipping lines. A custom duty has to be paid to release the containers, and then they are taken to the warehouse where the goods are unloaded/loaded. The empty or loaded containers are returned to the ship abiding by the timeline mentioned in the charter agreement, and the shipping process is completed.

However, in real-time, due to any undesirable events or challenges, handling cargo can exceed the timelines and invite demurrage and detention.

What is the meaning of demurrage?

The term Demurrage has its roots in the Old French word ‘demeurage’ or ‘demeurer,’ which means to linger, tarry.

Demurrage charges apply to an importer when he fails to take the delivery of the containers within the stipulated number of free days allowed (decided by the Port Authority). Demurrage charges are usually calculated on a per-day basis. This charge will keep on accruing until the delivery of the containers is taken, and sometimes they overtake the actual value of goods imported, leaving the importer no choice but to abandon the shipment.

Charges - Paid by the Importer

Demurrage charges apply to a shipowner when he fails to load or unload the containers within the stipulated number of free days allowed (decided by the Port Authority). Demurrage charges are usually calculated on a per-day basis. This charge will keep on accruing until the loading or unloading is not completed within the free time frame.

Charges - Paid by the Ship Owner

How are demurrage charges calculated?

In the calculation of Demurrage charges to the shipowner/port authority, the demurrage rate is multiplied by the number of days/part days over the agreed free days.

Example of calculation of demurrage charges

From the calculation, it is evident that Demurrage Charges are directly proportional to the Days Exceeded and the Demurrage Rate. Hence, the port or the shipping carrier should be over-cautious in calculating the Demurrage days.

Also, both the importer and the shipping carrier should judiciously read the Charter Contract to chalk out all the grey areas. It is important to note that Demurrage to the charterer would not run if the fault is on the part of the shipping carrier (for example - ship breakdown).

Why is Demurrage levied?

Many importers or freight forwarders have asked this question because of the high per diem charges which may feel unjust and unreasonable. These charges are levied by the shipping lines or port authorities to ensure efficient and quick turnaround of containers leading to better use of storage and container space. Demurrage and Detention are levied because of two main reasons: Importers use the containers provided by the Shipping Lines and hence need to be compensated. Acting as an incentive to the importer to quickly return the empty container and have a good turnaround time.

Other things to note about demurrage charges

Demurrage charged on the shipment may vary on the type of container being used, i.e., dry container, refrigerated container, a chassis, or any other equipment that the shipping line owns or leases.For conventional shipping lines/port authorities, the number of free days allowed ranges somewhere between three to seven, after which Demurrage is levied. Demurrage charges are different for all countries and are also dependent on the Shipping Line/Carrier. To complicate matters further, fees are applied on a per container as well as on a per-day basis after a designated free time.

Demurrage and Detention - know the difference

Post the release of consignment, from the yard and taken to the warehouse. Unloading has to be processed by the time frame. Keeping the container at the warehouse and exceeding the decided time limit will incur Detention. This penalty is paid to the owner of the container by the importer as compensation since the container could have been used for another shipping consignment.

Difference between demurrage and detention

1. Who is responsible for demurrage charges?

2. What are laytime and demurrage?

Laytime and Demurrage are probably the most important terms in a Charter Party and can have significant financial implications. Laytime - It is the free time allowed by the Port Authorities to the importer/exporter to load or unload the container from the shipping yard. Demurrage - The penalty charged for exceeding the free days allowed for storage of loaded containers at the yard is called Demurrage.

3. Can demurrage be capitalized?

4. Is the demurrage part of inventory cost?

5. How do you negotiate demurrage charges?

To negotiate Demurrage charges, the charterer must be sure of the type of cargo being imported/exported. If the cargo being imported/exported will require some special custom permission, the charterer should make sure that they have the documents and permissions in place. If not, they can negotiate for additional laytime with the port authority citing special cargo needs.

6. Is demurrage the same as despatch?

No, Demurrage is the penalty levied on the charterer in the cargo discharging operations from the shipyard after the laytime has been exceeded. Whereas, Despatch is an incentive clause included in the Charter Party by the Port Authority/ship line whereby if the charterer completes the cargo loading and discharging in a shorter period than agreed, then they may be entitled to Despatch Money. Usually, the Despatch rate is half of the Demurrage rate.