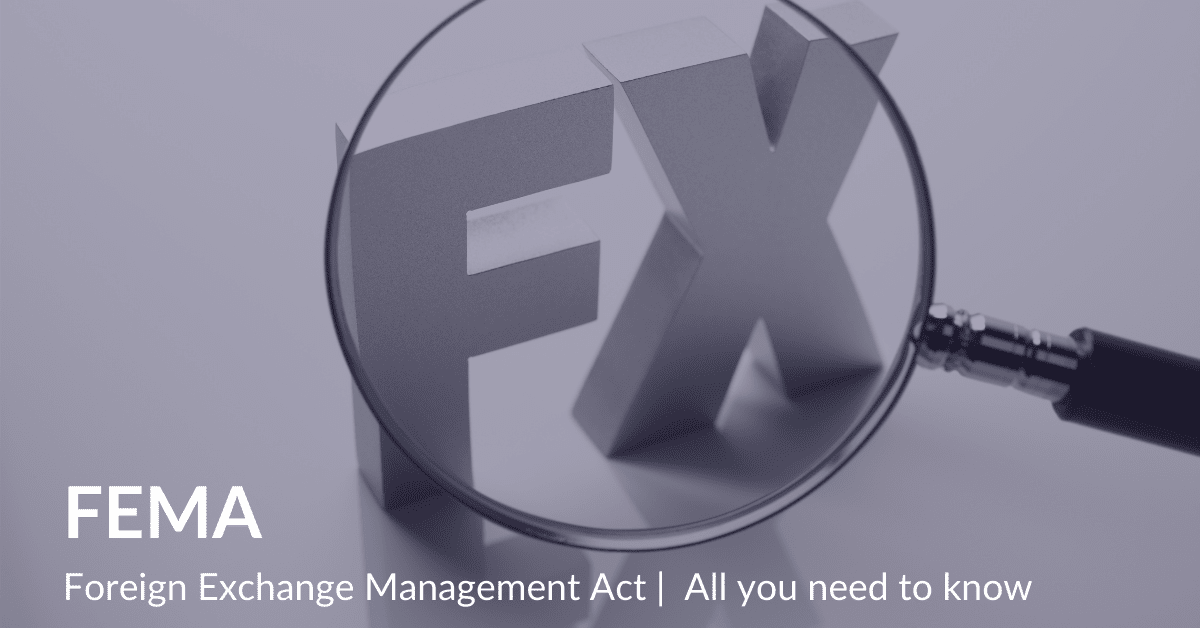 Foreign Exchange Management Act (FEMA) | All you need to know

The full form of FEMA stands for ‘ Foreign Exchange Management Act ’, an official body that consolidates and amends laws regulating foreign exchange in India. The primary objective of FEMA act was “facilitating external trade and payments and promoting the orderly development and maintenance of foreign exchange market in India”. FEMA was enacted by the Parliament of India in the winter session of 1999 to replace the Foreign Exchange Regulation Act (FERA) of 1973.

The RBI proposed FEMA in 1999 to administrate foreign trade and exchange transactions. According to the official order, FEMA would “consolidate and amend the law relating to foreign exchange (forex) with the objective of facilitating external trade and payments and for promoting the orderly development and maintenance of foreign exchange market in India”.

The Foreign Exchange Management Act officially came into force on 1st June 2000. Thus the forex market in India is regulated by RBI and its arrival paved the way for the introduction of the Prevention of Money Laundering Act (PMLA) of 2002.

Following are the most important objectives of FEMA:-

3. Guidelines and Regulations for outward remittances under FEMA

Most significantly, FEMA regarded all forex-related offences as civil offences, whereas FERA regarded them as criminal offences. Additionally, there were other important facts such as:

FEMA also gave the RBI the authority to regulate capital account transactions. As per the Foreign Exchange Management (Permissible Capital Account Transactions) Regulations of 2000, “no person shall undertake or sell or draw foreign exchange to or from an authorised person for any capital account transaction”. The Regulations prohibited any person resident outside India from investing in Indian firms or organisations in the business of chit funds such as a Nidhi company, agricultural or plantation activities, real estate (excluding development of townships, construction of residential/commercial premises, roads or bridges), or construction of farm houses, and/or in trading in Transferable Development Rights (TDRs).

It did allow for transactions carried out by Indian residents that included investments in foreign securities, foreign currency loans raised in and out of India, transfer of immovable property outside India, the issue of guarantees in favour of anybody living outside India, and the export/import and holding of currency/currency notes.

Under The Foreign Exchange Management Act, the central government issued the Foreign Exchange Management (Current Account Transaction) Rules of 2000 which restricted forex deals made by authorised persons under their current account. Under the FEMA rules and regulations, current account transactions that were prohibited, not prohibited, and permitted, required the prior approval of the central government and/or RBI.

Prohibited transactions included the remittance of lottery winnings, income from racing/riding, purchase of lottery tickets, banned/proscribed magazines, football pools, sweepstakes, commission on exports made towards equity investment in JVs/wholly owned subsidiaries of Indian companies abroad, amongst others. Additionally, Nepal and Bhutan allowed the use of Indian currency for local transactions, and the citizens of these countries were considered at par with Indian citizens from a legal standpoint. Because of these provisions allowing for a common currency market in India, Nepal and Bhutan, use of forex for transactions in – or with the residents of – Nepal and Bhutan was also prohibited.

Moreover, FEMA recognized the growing international presence of Indians as well as the rising contribution of Non Resident Indians (NRIs) to the Indian economy. So under the LSR limit scheme of FEMA, one can send money to India -- upto a limit of US $250,000 in one financial year. Also it is applicable for a variety of purposes that include international travel to any country (except Nepal and Bhutan), gifts, donations, travel for overseas employment, emigration and maintenance of close relatives living abroad.

6. Features and Provisions under FEMA

The RBI was the overall controlling authority as far as foreign exchange management was concerned. It worked with and empowered the central bank to specify the different classes of capital account transactions along with the exchange rate admissible for each such transaction.

With Drip Capital’s expert guidance and consulting, entities can better comply with FEMA. This includes specific guidance on FEMA-applicable areas and export businesses within India as well as all branches, offices, and agencies located outside India that are owned or controlled by a resident of India.

7. Difference between FERA and FEMA

When FERA was introduced in 1973, the Indian economy was suffering from an all-time low of foreign exchange (forex) reserves. To rebuild these reserves, the government took a stance that all forex earned by Indian residents -- living within India or abroad -- belonged to the Government of India and had to be surrendered to the Reserve Bank of India (RBI). FERA, thus, severely regulated all forex transactions that had a direct or indirect impact on India’s forex reserves, which included the import and/or export of currency.

However, the objective of FERA did not quite have the effect that was envisioned and the Indian economy continued to decline. To compound matters, the strict regulatory environment created under the ‘License Raj’ dampened the Indian economy further. To mitigate the downturn, then-Finance Minister Manmohan Singh unleashed economic liberalization in 1991 and as a result, the government had to make a series of concessions to FERA’s stipulations under the new rules. These concessions made FERA largely irrelevant under the new economic regime. Eventually, the government decided to move from “currency regulation” to “currency management”, and set up FEMA. And so FERA in India was replaced by FEMA.