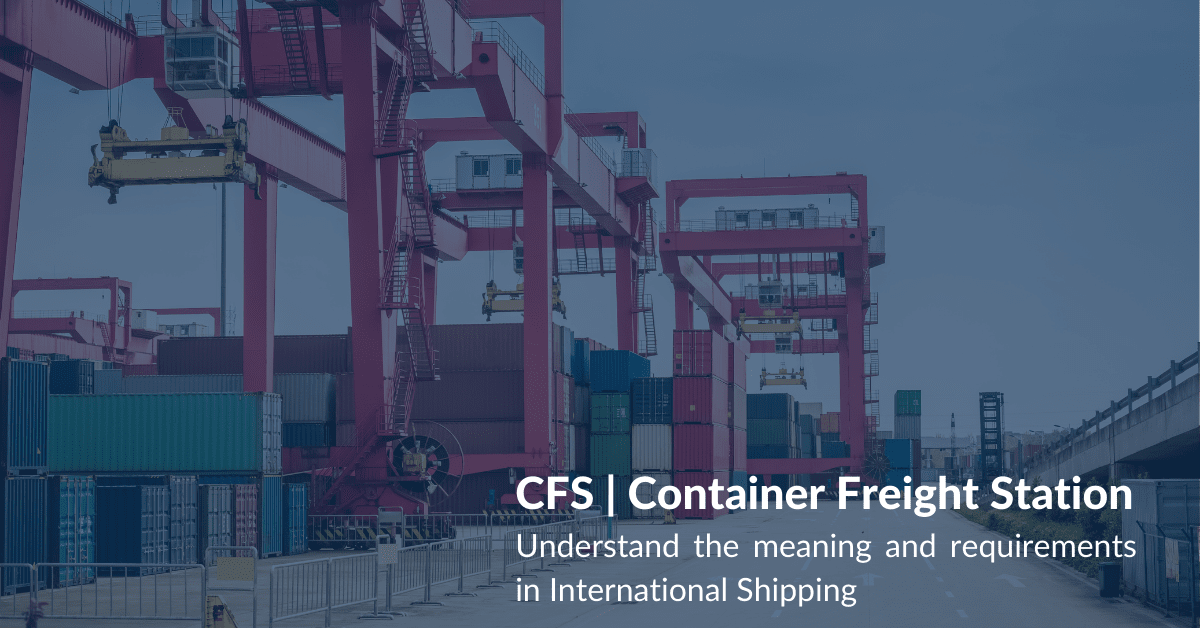 Previously, while loading the smaller shipments, the goods were sorted at the time of onboarding. This process often led to the jumbling of all the goods/products together. However, with the introduction of containerized shipping, goods can be classified and organized before they are onboarded. The containerized system has transformed how the International Shipping operates by optimizing the process of how shipments are onboarded. CFS or "Container Freight Stations" helps in consolidating smaller shipments or Less Container Load (LCL) shipments, hence playing a vital role in the containerized shipping process.

A CFS stands for Container Freight Station (CFS). It is a warehouse station responsible for the consolidation or deconsolidation of cargo before the products/goods are imported or exported. The station is involved in an export-import transaction, both at the point of origin as well as the destination. In simpler terms, it is a space where goods are stored before loading and after unloading the cargo.

For LCL, wherein the shipments belong to several customers, the cargo is loaded in one container and is brought to a CFS to be consolidated before the goods are sent to their final destination.

The CFS is operated by a shipping line or a terminal and its warehouse is located close to the port or shipping terminal. These stations are also responsible for customs clearance procedures and documentationfor its shipments. It is a customs notified area where all dealings are processed through customs authentications. A Customs House Agent (CHA) serves as the main link between container freight stations and the parties involved in the transaction.

CFS facilitates intermodal transport and optimizes the process of sending smaller shipments to their respective locations with appropriate safety measures and tracking facilities. Here are a few reasons why CFS service is an essential part of import logistics & export logistics.

How does a Container Freight Station Work?

Container freight stations play a role both at the time of embankment as well as disembarkment of goods from the point of origin (export) to the destination (import). The procedure followed by CFS during import and export is explained below.

Role of CFS while Importing goods

CFS acts as an extended part of a port. While importing goods, it can be sent directly to the CFS instead of sending them straight from the port itself, thus reducing port congestion significantly.

For example, Company ABC from India has a shipment coming from US-based Company XYZ. The exporter will prepare the necessary documents and accordingly notify the CHA house. Once the goods are at the port, they will be transferred to the CFS and the subsequent processes are followed -

Step 1:- The goods received at Indian port are first verified by customs and stacked at the station.

Step 2:- Before taking the consignment to CFS, the steamer agents/liners/importers have to file the Import General Manifest at the port.

Step 3:- The CFS then de-stuffs the goods from the containers.

Step 4:- The CHA/Importer has to file a Bill of Entry with customs after which the goods are assessed, and payment of duty made.

Step 5:- Post customs clearance, the department gives “out of charge” order, and the goods are released from the CFS with a “gate pass” to the trader.

Role of CFS while Exporting Goods

As explained above, a CFS is responsible for the consolidation of cargo and stuffing it in containers before the goods are shipped. This process reduces congestion at the port of origin and ensures that the cargo is shipped efficiently.

For example, Company ABC from India has a shipment going to Company XYZ in the US, the procedure involving CFS for export of goods will be as follows:-

Step 1:- The exporter will load the goods in a truck and deliver it at the nominated CFS along with the shipping bill

Step 2:- The goods will then undergo the process of loading and carting

Step 3:- The goods will be scanned and verified in the warehouse and then stuffed into containers

Step 4:- The container is then sealed by the customs officer and sent out of the CFS to the port

What are the main functions for a Container Freight Station?

The main freight station achievements are listed below:

An ICD or an Inland Container Depot is also a transit facility like CFS. However, ICDs are mostly located in the interior part of the country while a CFS is a customs space situated close to sea/ocean ports. An ICD can operate as an individual entity while the CFS is a part of the customs house jurisdiction.

A bonded warehouse holds goods that have already undergone customs clearance procedures. On the other side, the goods brought at CFS have to undergo customs verification and clearance.

A Container Yard (CY) in shipping is a dedicated space at the port where the FCL containers are brought and stored before they get loaded onto the ship. While CFS has the same functionality, the station processes LCL shipments and not FCL.