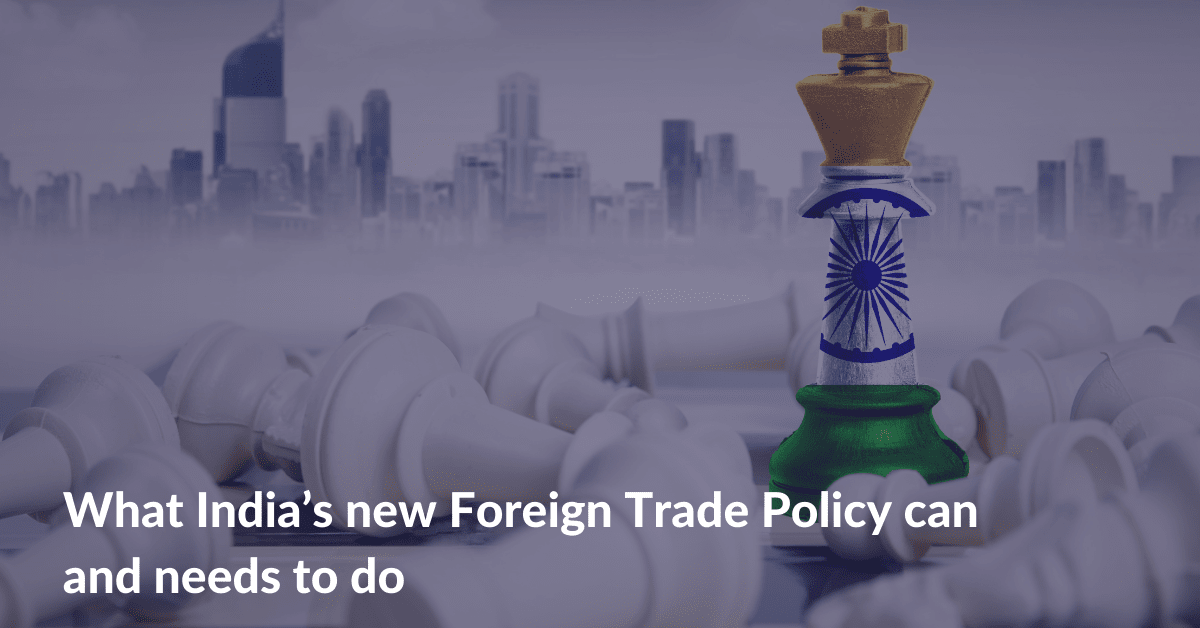 This is probably one of the most troubled times for exporters almost anywhere in the world. Whether because of political considerations or because of pandemic-induced lockdowns, more and more nations seem to have withdrawn into protectionist shells. India, now more than ever, needs a robust Foreign Trade Policy (FTP) that can tackle the new normal while nations struggle to deal with a covid-19 pandemic and economic downturn.

The existing FTP, which was due to end in March 2020, was extended in light of the pandemic till 31 March 2021. It’s now time for a new FTP to be framed. What will it contain? Will it be strong enough to deal with the unforeseen repercussions of a pandemic, lockdown, and an increasingly protectionist world? Here are just a few expectations from this policy.

In a paper released in August last year, the Confederation of Indian Industry (CII) made a case for a careful calibration of import and export duties. Pushing for India’s increased participation in the global value chain, the paper said that creating a transparent import environment will encourage companies to import components and raw material, which can then be exported after value addition. Ideally, India should follow the example of many nations, where a pyramid duty structure is in place for imports, with the lowest duty on the raw material.

India does have a scheme in place to encourage exporters. The EPCG (Export Promotion Capital Goods) allows duty-free import of capital goods on condition that at least a part of it is used to produce goods for export. However, the scheme has not been as successful as envisaged.

The problem may lie in the low penalty imposed on companies that do not meet their export obligation. Reports say that there are cases of intentional default, where companies find that it’s cheaper to import under the EPCG even after considering government-imposed penalties. That defeats the objective of the scheme, which is to increase exports. The new FTP should either strengthen the existing scheme or revamp it to promote exports.

The existing FTP focuses on the Merchandise Exports from India Scheme (MEIS) -- an amalgamation of previous export promotion schemes. The MEIS is essentially an incentive scheme, where exporters receive duty credit scrips for a percentage of the value of the goods exported. These scrips can be used to pay a variety of taxes and duties.

Incentivising exporters may seem like a great idea, except when such incentives are against the World Trade Organization (WTO) norms. India has decided to withdraw the MEIS and replace it with a more nuanced Remission of Duties or Taxes on Export Products (RoDTEP) scheme.

The government also has the duty drawback scheme (DBK) in place to help exporters. However, as it stands, the DBK scheme isn’t quite effective, and we would like to see it overhauled in the new FTP. It offers a duty drawback as a percentage of the exported price -- but with a cap. Effectively, this gives an exporter of expensive, high-quality goods the same DBK as an exporter of cheap goods. The new DBK (or its equivalent) should account for the value of exports and promote it accordingly.

This should be at the core of the FTP. The WTO works to dissuade governments from heavily subsidizing exporters to provide a level playing field to all nations. The Indian government is well aware of the need to stay within the WTO norms and has already taken significant steps to withdraw subsidy-led schemes.

However, more needs to be done at a fundamental level to promote exports and ensure that Indian exports are competitive in the global market. To do this will mean an overhaul of the government’s policy regarding foreign trade.

However, a lot remains to be done. Industry bodies are lobbying to have the scheme extended. With a new lease of life, and with more funds at its disposal, TIES can focus on resolving two of the main issues that dog exporters -- warehousing and storage, especially an efficient cold chain.

Like infrastructure, upgrading the technology and skills of exporters could be a good option. This will allow Indian exporters to be competitive on their advantage, rather than relying on government subsidies and other financial sops opposed to the WTO. Industry bodies have already sought an agri tech upgradation fund, which will not just help the sector but also promote exports. There are sector-specific schemes for technology upgradation and skills improvement. What is needed is for one umbrella authority to extend these schemes across sectors.

MSME exporters form a large chunk of Indian exporters. They are often unaware of global laws and requirements. The government already offers assistance to these smaller players by way of courses and workshops to keep them abreast of what’s going on. This is something that the new FTP needs to take ahead. In fact, along with information on laws and global markets, MSME exporters would need information on credit availability. There is also a crying need to educate exporters about intellectual property rights, patents, GI, and so on. These are crucial to help exporters stay on the right side of IP law.

Exports are a vital part of the country’s GDP. Foreign trade must be given sufficient importance and investment. Several good steps have already been taken, but there’s a long way to go. Rather than take reactive stopgap measures, the FTP could take proactive steps to ensure that exports are sustainable for Indian companies and in line with WTO norms. The new FTP could be one more step on the path to a vibrant, export-led economy.

(The article was first publised on economictimes.com)