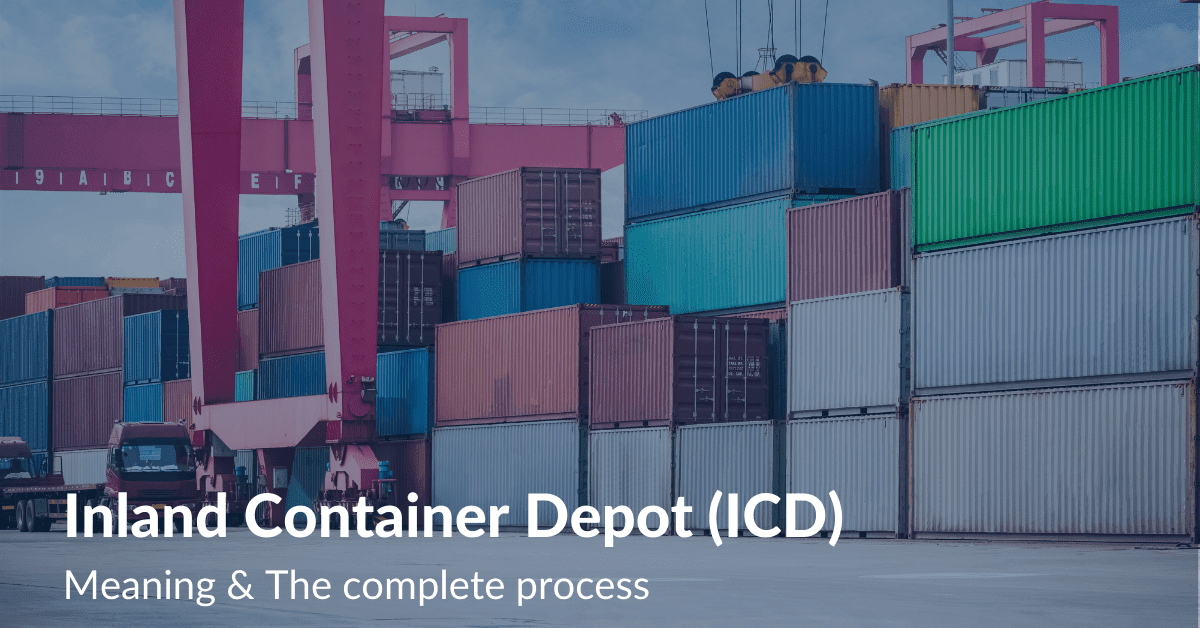 What is the role of Inland Container Depot?

An Inland Container Depot (ICD) is a container storage facility situated in the hinterlands, away from any major port. Shipping companies use ICDs to store and move containers before and after transporting them to the seaport.

As they are located away from the sea or any major river routes, Inland Container Depots are also sometimes referred to as the ‘Dry Ports.’

Why is Inland Container Depot important?

At an ICD, the sea custodians, freight forwarders, customs brokers as well as officials from the customs department provide their services to the importers and the exporters. They process their shipment near their godowns and factories, away from the far-off ports. ICDs help de-stressing and decongesting the ports where the storage spaces are limited due to the land’s judicial use

1) ICDs are physical facilities that store the containers temporarily before they are moved to the port and loaded on the ships. Exporters can also place their cargo inside the containers at an ICD.

2) Along with being a storage facility, ICDs can also provide export and import customs clearances. All the services that are provided at a port, can also be availed at the ICD situated far away from the port.

3) ICDs also act as servicing and repair facilities for containers and other moving equipment.

Although ICD and CFS perform a lot of similar operations, they are two different entities.

A CFS is located near a seaport and mainly consolidates and segregates the cargo. CFS majorly handles LCL shipments, since they require consolidation services. CFS is set up to decongest the ports and free up the valuable physical space near the sea.

ICDs are located far away from the ports and connect the ports with the hinterlands. All the customs related services that are available at the ports, can also be availed at the ICDs, along with consolidation and storage of cargo.

1. Who owns an inland container depot?

Globally, ICDs can be privately owned as well as state-owned. In India, they are state-owned and are managed by the Container Corporation of India (CONCOR).

2. How many inland container depots are there in India?

According to the data maintained by the Department of Commerce (DoC), there were 129 ICDs in the country as of March 2017 (Appendix I). New Delhi has Asia’s largest Inland Container Depot.

3. What is meant by ICD in logistics?

ICD stands for Inland Container Depot, a facility that connects the main ports of a country to the hinterland. ICDs are also known as dry ports.

4. What is the difference between a port and a terminal?

Ports are places that are designed to carry out the transportation of humans and goods, while a terminal is a specific point on the port from where the movement takes place. Ports contain several terminals.

5. What is the difference between a port and a harbor?

Ports are designated areas that are constructed for the transport of humans and goods. Whereas, a harbor is an area surrounded by walls, where ships are docked to protect them from tides and currents.

6. How does an Inland Container Depot work?

ICDs are located far away from the ports in the hinterlands. They perform all the customs related functions near the major production and consumption hubs of the country and help in decongesting the ports.