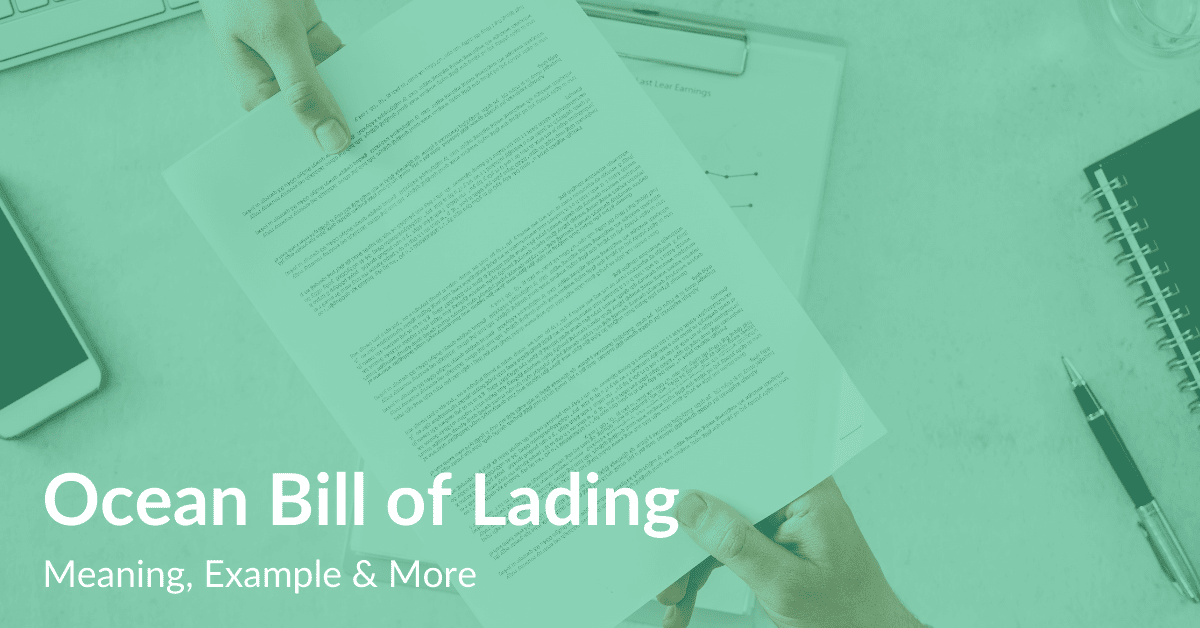 When legally carrying a shipment through transit, the carrier needs to possess a bill of lading (BOL). A BOL is a commonly used legal document that acts as a receipt to prove that the carrier can transport the goods that it carries. However, when it comes to transporting shipment through international waters, the Ocean Bill of Lading is required.

What is an Ocean Bill of Lading?

An Ocean BOL is a legal contract between the shipper and the carrier which acts as a receipt for the mentioned articles that are required to be shipped overseas. It defines the parties involved in the shipping process along with the description of the articles being shipped and the routing details. The Ocean BOL includes details like the nature of the articles, its quantity, condition, destination, location of the articles that are being shipped. Hence, it can be considered as a receipt and an invoice with a legal claim.

When is the Ocean Bill of Lading Issued?

Types of Ocean Bill of Lading

Straight: Straight BOL is issued only to the consignee and no other parties. The consignee can have authority over the articles shipped by producing the cashier with a copy of the signed BOL.

Shipper’s Order: It is effective after the shipper or a representative approves it. Approved and signed document is shared with the bank close to the buyer and is preserved till the transaction is closed. Post receiving the document, the BOL is transferred to the buyer.

Clean Bill of Lading (Clean BOL): When the articles arrive, a quality check/inspection of the shipment is carried out. Post clearing the same, the clean BOL is issued and the importer can receive the shipment.

On Board: The vessel owner signs this BOL. On Board BOL, as the name suggests, is issued when the shipment is loaded on the vessel.

What is the Ocean Bill of Lading Tracking & How to Track it?

The Ocean BOL tracking is a solution to gauge the shipping status of the cargo. The facility is provided by the carrier website. Some of them even provide real-time updates of the cargo. To know the cargo status, normally the booking number, the bill of lading number, or the container number is provided.

An Ocean BOL includes specifics about the nature of articles being shipped, the quantity of shipment, destination, and other information like the commercial value of the shipment, and the type of packaging used. The shipper receives the Ocean BOL when the shipment is picked after which it needs to be signed by him and the carrier. Post the completion of the shipping process and the delivery of the shipment, the Ocean BOL is shared with the receiver who then signs it.

The template carries information about the exporter, the booking number, document number, export references, ultimate consignee, forwarding agent, notify party, pre-carriage, place of receipt, domestic routing, exporting carrier, the port of loading, loading pier/terminal, the port of discharge, place of receipt on the carrier, type of move, the quantity of articles, description, weight, and measurements of the articles, ship reference number, freight rates, charges, carrier information, B/L number and declaration that the goods are received by the carrier and that he/ she will have legal possession of the articles till they reach the destination and relevant procedures are completed. 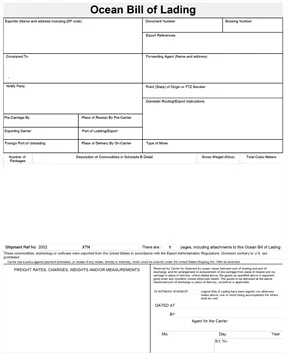 Difference Between Ocean, Sea Waybill, and Memo Bill of Lading

Sea Waybill: A Sea Waybill is not negotiable because the original is not issued and is not considered as a document of title. It acts as evidence of the contract of shipment and receipt of shipment. It is more relevant in case of non-commercial shipments, intercompany sales, or where documentary credits are not involved. A properly defined consignee is not required to produce any transport document at the discharge port. A Sea Waybill is issued in the following cases:-

Memo Bill of Lading: It is a non-negotiable, non-transferrable, unfreighted BOL. It can only be used as a receipt of shipment and can not be considered as a document of title.

FAQs on Ocean Bill of Lading

An Ocean Bill of Lading is specifically for articles that are required to be shipped overseas. An original bill of lading is for different modes of transport.