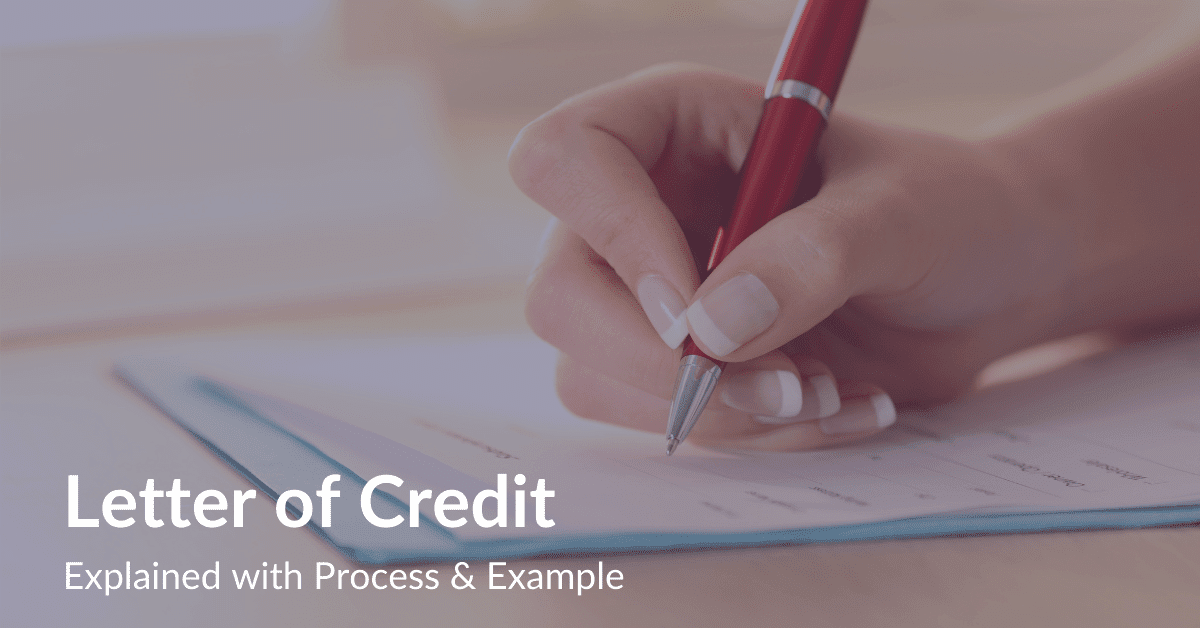 What is a Letter of Credit?

A letter of credit or LC is a written document issued by the importer’s bank (opening bank) on importer’s behalf. Through its issuance, the exporter is assured that the issuing bank will make a payment to the exporter for the international trade conducted between both the parties.

The importer is the applicant of the LC, while the exporter is the beneficiary. In an LC, the issuing bank promises to pay the mentioned amount as per the agreed timeline and against specified documents.

Why is Letter of Credit important?

A letter of credit is beneficial for both the parties as it assures the seller that he will receive his funds upon fulfillment of terms of the trade agreement and the buyer can portray his creditworthiness and negotiate longer payment terms, by having a bank back the trade transaction.

Features / Characteristics of letter of credit

A letter of credit is a transactional deal, under which the terms can be modified/changed at the parties assent. In order to be negotiable, a letter of credit should include an unconditional promise of payment upon demand or at a particular point in time.

A letter of credit can be transferred, also the beneficiary has the right to transfer/assign the LC. The LC will remain effective no matter how many times the beneficiary assigns/transfers the LC.

The beneficiary will only receive the payment upon maturity of letter of credit from the issuing bank when he presents all the drafts & the necessary documents.

Documents required for a Letter of Credit

How does Letter of Credit Work?

Fee and charges payable for an LC

There are various fees and reimbursements involved when it comes to LC. In most cases, the payment under the letter of credit is managed by all parties. The fees charged by banks may include:

Parties involved in an LC

Applicant An applicant (buyer) is a person who requests his bank to issue a letter of credit.

Beneficiary A beneficiary is basically the seller who receives his payment under the process.

Issuing bank The issuing bank (also called an opening bank) is responsible for issuing the letter of credit at the request of the buyer.

Other parties involved in an LC arrangement:

(Note:- Negotiating bank can either be a separate bank or an advising bank)

The entire process under LC consists of four primary steps:

After receipt of the LC, the exporter is expected to verify the same to their satisfaction and initiate the goods shipping process.

After the goods are shipped, the exporter (either on their own or through the freight forwarder) presents the documents to the advising/confirming bank.

Step 4 - Settlement of payment from importer and possession of goods

Letter of Credit with Example

Suppose Mr A (an Indian Exporter) has a contract with Mr B (an importer from the US) for sending a shipment of goods. Both parties being unknown to each other decide to go for an LC arrangement.

The letter of credit assures Mr A that he will receive the payment from the buyer and Mr B that he will have a systematic and documented process along with the evidence of goods having been shipped.

From this point on, this is how a letter of credit transaction would unveil between Mr A & Mr B:-

To understand the process clearly refer to this image: 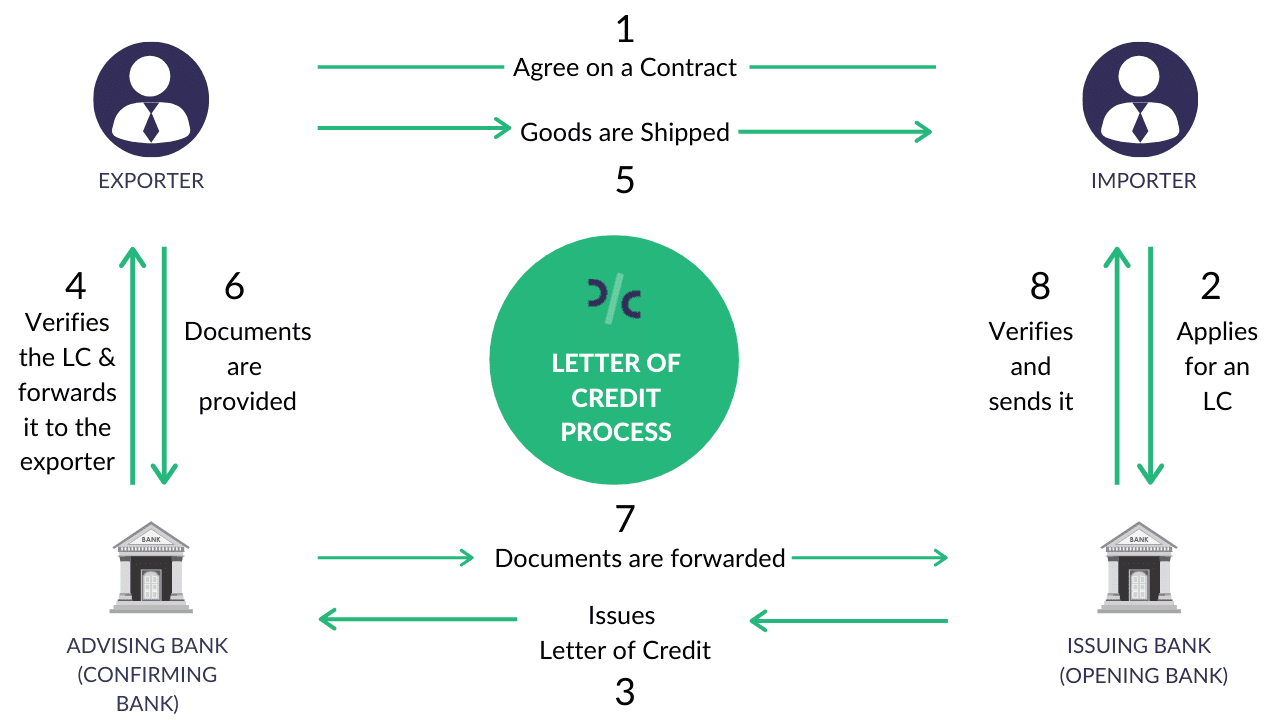 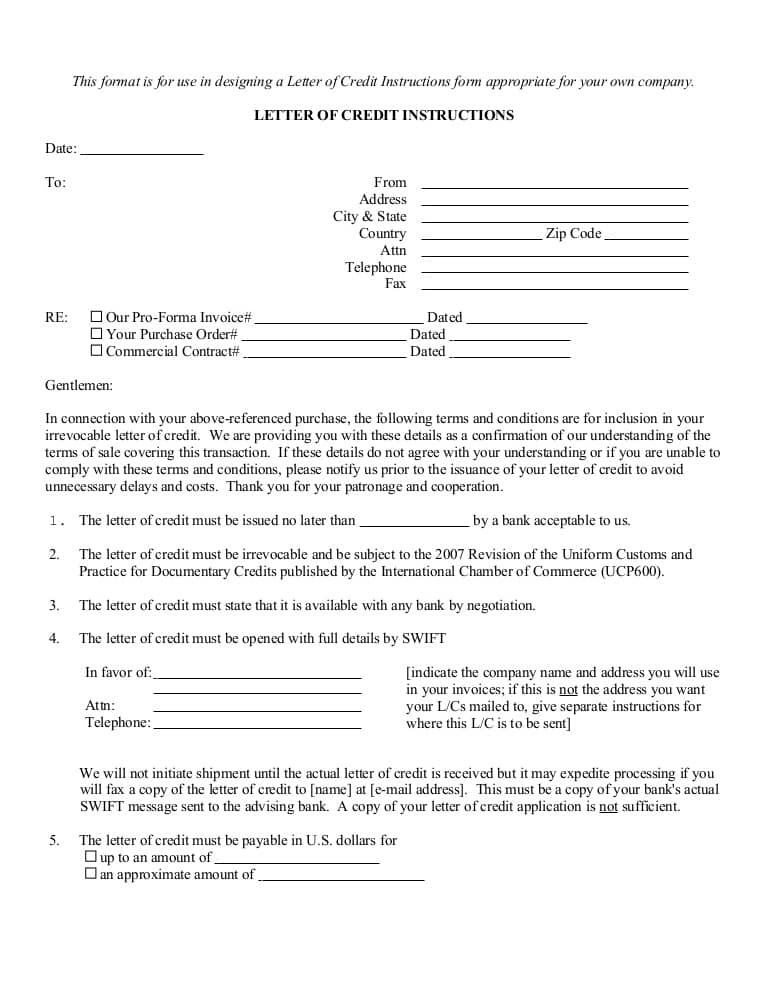 Following are the most commonly used or known types of letter of credit:-

To understand each type in detail read the article, Types of letter of credit used in International Trade.

Bank guarantee vs letter of credit

A Bank guarantee is a commercial instrument. It is an assurance given by the bank for a non-performing activity. If any activity fails, the bank guarantees to pay the dues. There are 3 parties involved in the bank guarantee process i.e the applicant, the beneficiary and the banker.

Whereas, a Letter of Credit is a commitment document. It is an assurance given by the bank or any other financial institution for a performing activity. It guarantees that the payment will be made by the importer subjected to conditions mentioned in the LC. There are 4 parties involved in the letter of credit i.e the exporter, the importer, issuing bank and the advising bank (confirming bank).

Things to consider before getting an LC

A key point that exporters need to remind themselves of is the need to submit documents in strict compliance with the terms and conditions of the LC. Any sort of non-adherence with the LC can lead to non-payment or delay and disputes in payment.

The issuing bank should be a bank of robust reputation and have the strength and stability to honor the LC when required.

Another point that must be clarified before availing of an LC is to settle the responsibility of cost-bearing. Allotting costs to the exporter will escalate the cost of recovery. The cost of an LC is often more than that of other modes of export payment. So, apart from the allotment of costs, the cost-benefit of an LC compared to other options must also be considered.

FAQs on Letter of Credit

1. Is Letter of Credit safe?

Yes. Letter of Credit is a safe mode of payment widely used for international trade transactions.

2. How much does it cost for a letter of credit?

Letters of credit normally cost 1% of the amount covered in the contract. But the cost may vary from 0.25% to 2% depending on various other factors.

3. Can a letter of credit be cancelled?

In most cases letters of credit are irrevocable and cannot be cancelled without the agreed consent of all parties.

4. Can a letter of credit be discounted?

A letter of credit can be discounted. While getting an LC discounted the supplier or holde of LC should verify whether the issuing bank is on the approved list of banks, with the discounting bank. Once the LC is approved, the discounting bank releases the funds after charging a certain amount as premium.

5. Is a letter of credit a not negotiable instrument?

A letter of credit is said to be a negotiable instrument, as the bank has dealings with the documents and not the goods the transaction can be transferred with the assent of the parties.

6. Are letters of credit contingent liability?

It would totally depend on future circumstances. For instance, if a buyer is not in a condition to make the payment to the bank then the bank has to bear the cost and make the arrangement on behalf of the buyer.

7. A letter of credit is with recourse or without recourse?